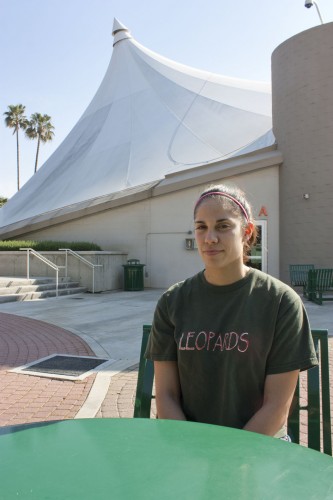 Emily Carrillo decided to play a fifth year for the women’s basketball team while beginning her graduate work in the teaching credential program here at La Verne. In her final season, she reached the 1,000-point mark, regaining her status as one of the top SCIAC players. She scored 12 points in her final game. / photo by Victoria Castaneda

Emily Carrillo not only succeeds on the basketball court but off as well.

Juggling a teaching credential program, a job at 24 Hour Fitness, and leading her team – she does everything to her fullest potential.

Carrillo, the senior captain of the women’s basketball team this year hit a milestone – scoring 1,000 points for her career.

In addition, she was selected to the First Team All-Southern California Intercollegiate Athletic Conference to cap her successful senior season.

“It was helpful to have them as coaches for all four years of my high school career. I remained close to Coach Kerns, who has been a mentor to me throughout my career at La Verne,” Carrillo said.

Carrillo has played guard and forward for La Verne, and has been one of its key players.

“She is a great teammate (a great) mentor, and she has a great sense of humor,” Matt Rogers, head coach of women’s basketball said.

“The girls count on her for advice to keep things in the right direction.

“If I could describe her I would say she is tenacious, unselfish, a great teammate, and a hard worker,” Rogers said. “She is probably one of the top five players ever to play in La Verne.”

Her basketball career started at the age of 4.

She said her older brother, Nathan, whom she always looked up to, first made her love the game.

“When I got to middle school, I was afraid to try out for the sixth grade team, because I didn’t think I would be good enough to make the roster,” Carrillo said.

“My only experience playing against others had come from my elementary school recess breaks and my front yard.

“I never played in any leagues or anything outside of the school so I had no concept of my ability.”

Carrillo, who will graduate this year, has just ended her basketball career at La Verne.

Despite that she said basketball will always have a special place in her heart.

Although she will no longer be playing basketball at La Verne, this is not the end of her basketball career.

When she finishes her teaching credential program, she wants to be a high school teacher and coach high school basketball.

Eventually she would like to coach basketball at the University level.

Playing at La Verne has taught her to be a leader on and off the court.

“I am most proud of growing into a leadership role, knowing that at the end of the season my teammates wanted me to have the ball,” Carrillo said.

“There are a lot of things about Emily’s game that we will miss,” said junior guard Stephanie Shepard.

Erica Lynn Lares can be reached at erica.lares@laverne.edu.

Grady Lee Thomas can be reached at grady.thomas@laverne.edu.