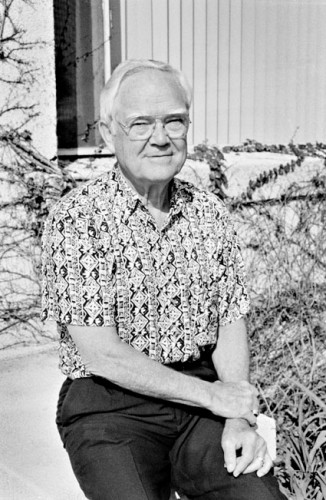 Dr. William Donald Clague, shown here in 1997, died March 20 at the age of 90 of natural causes. Celebrated professor and administrator at the University of La Verne, Dr. Clague was the founder of La Verne College of Law and helped create the School of Continuing Education. / file photo by Shelby Wertz

Dr. William Donald Clague, esteemed professor and administrator at the University of La Verne, has died of natural causes. He was 90.

Known to friends and colleagues as Don, Dr. Clague, who died on March 20, helped shape the community and expand the University of La Verne through the development of graduate programs.

Dr. Clague came to La Verne College in 1966 as the dean of graduate professional studies, a position he held until 1982.

“Don came to La Verne when Harold Fasnacht was president, and Fasnacht had the reputation of being an innovator,” Adeline Cardenas-Clague, associate vice president of academic support and retention and daughter-in-law of Dr. Clague, said.

During his tenure at ULV, Dr. Clague held a variety of positions, including dean of graduate and professional studies, vice president of academic affairs, executive vice president and faculty administrator in the doctoral program in educational management.

“Don was the kind of administrator who always put students first, which is something I have taken away from my time with him,” ULV President Steve Morgan said.

“He was a peacemaker, and I learned a lot about working successfully in large groups from him.”

Clague is remembered for his hand in developing new programs.

He developed the curriculum for the Marriage, Family and Child Counseling master’s program, played a key role in the creation of the School of Continuing Education and the La Verne College of Law.

“Don was the father of graduate education at the University of La Verne,” Morgan said. “He provided leadership for their development. Whether or not we would have developed these programs later on without him is a good question.”

Dr. Clague was born Nov. 29, 1920, to Allen and Pearl Clague in Fruitdale, Ala., and was the oldest of three children.

He attended Bridgewater College in Virginia, where he met his wife, Betty Scrogum, to whom he was married for 62 years.

Dr. Clague did graduate work at Columbia University and later earned his master’s and educational doctorate degrees from the University of Virginia.

He later returned to Bridgewater College where he taught and served as the dean of students.

Dr. Clague was also an active member of the community.

He served as president of local organizations such as the La Verne Rotary Club, the David and Margaret Home and the La Verne Chamber of Commerce.

An ordained minister in the Church of the Brethren when he was 18, Dr. Clague served on numerous boards and committees and as chairman of the Pacific Southwest Conference.

“Don was a true Southern gentleman and a loving family man with a mild manner, soft drawl and a kind spirit,” Cardenas-Clague said.

“He carried this into his professional life and managed difficult situations with a lot of grace.”

“He accomplished much in his professional life, but the loving relationship he shared with his wife was probably his greatest life accomplishment, one that his family will treasure.”

Dr. Clague was honored in a memorial service at 10 a.m. April 9 at Hillcrest Homes in La Verne.

In lieu of flowers, memorial contributions may be made to the Doctorate in Education Fund through the University Advancement office at the University of La Verne.