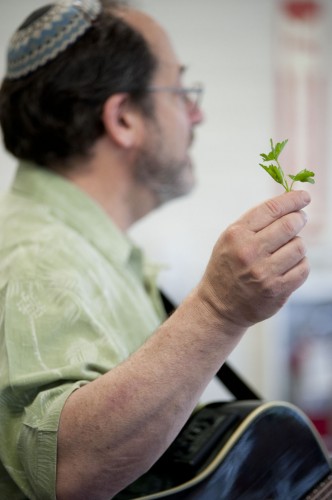 Paul Buch, cantor of Temple Beth Israel of Pomona, describes the symbolism of the bitter herb at the Model Seder Tuesday, in the West Dining Room. Buch included an explanation of the Passover meal and sang traditional Jewish songs as well a few humorous non-traditional songs and a soulful rendition of “Let My People Go.” / photo by David Bess

On Tuesday students, faculty and staff gathered to experience the University’s annual Model Passover Seder. The Seder is a Jewish ritual, which marks the beginning of the eight-day Jewish holiday Passover.

Passover begins this year on April 18 at sundown.

The Seder is a custom that is fulfilled over dinner by family or community; Jews retell the story of the Exodus from Egypt reading from the Haggadah and taking part in various customs during the course of the meal.

Passover is a celebration of the Jews’ escape from slavery in ancient Egypt.

“What does the word Seder mean? It literally means order and a specific sequence to what we are doing,” said Cantor Paul Buch of Temple Beth Israel in Pomona, who played his guitar and sang songs to lead the Tuesday event.

University Chaplain Zandra Wagoner and Professor of Communications Don Pollock were responsible for putting the Seder together.

“I have been helping with the Seder for about 10 years and have attended the annual Seders (here) for about 20 years,” Pollock said.

Instantly, attendees were singing along with Buch and reading from the Haggadah, which tells the story of Passover.

The West Dining Room had a large and small table with white tablecloths, grape juice, food, candles and more.

“I loved it. I am not Jewish; my father was the minister of the Brethren Church,” said Karen Wolff, a ULV alumna. “I like learning about different religions and traditions. This year it worked out where I could attend. This is my second Seder here at La Verne.”

Buch said there are 14 steps to complete a Seder. Some of the steps begin with a blessing called Kadesh.

During this time they offered grape juice instead of wine. The wine symbolizes the “joy of life,” Buch said.

Next a hand washing, called urchatz, took place to get ready for the ceremony, where people are free to wash, recline, learn and teach.

The Nirtzah is the conclusion of the Seder. As the Seder ends, people raise their glasses of wine. At the end of the Seder people praised Buch for a job well done and enjoyed a delicious meal.

“We had a really nice turn out,” Pollock said. “Paul is such an engaging person. He made it entertaining,”

“I did not know what to expect,” said Sarah Vasquez, senior sociology major, who attended the Tuesday Seder. “Paul Buch made learning interesting and fun. It was not just about facts, Paul got everyone involved.”

“This is my fourth year in a row at La Verne and I love it,” Buch said. “It is great getting to know our own freedom stories. I realize I am working with a group who may or may not be familiar with a new word or idea. Learning and celebrating should not be boring, it should be fun. (Passover) is a holiday of rejoicing.”

“This event is a great opportunity for all to learn and celebrate together,” Wagoner said. “All of us can relate to a story about liberation and freedom.”