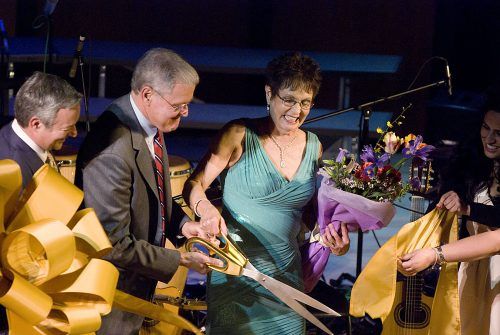 The final event for the dedication of Morgan Auditorium took place on Saturday and featured Ann and Steve Morgan opening the concert with gratitude speeches and the audience giving them a standing ovation.

“Lucky for you I will not be trying to play one of these instruments behind me,” President Morgan said as his opening statement.

Alumni, faculty, current students, and donors to the University of La Verne packed into Founders Hall to see a concert in the auditorium that has just been renovated in Ann and Steve Morgan’s honor.

The night included a performance by the Reed Gratz Band, a guitar trio featuring Michael Ryan, and James Calhoun and the University Chorale and Chamber Singers.

The event was part of a weeklong dedication celebration with different special performances and speeches being given every night.

The part of the night that most people were interested in was listening to the introduction and speeches for Ann and Steve Morgan.

“Tonight is about recognizing the two people who have made the University of La Verne the magnificent university it is today,” said Luis Faura, the chairman for the board of trustees.

President Morgan thanked all those who made the renovation of the auditorium possible.

“The transformation for this building didn’t happen by itself,” Morgan said.

After visiting the past, the last part of his speech turned toward the future with Devorah Lieberman.

“I am so pleased to be able to turn the reigns over to her,” Morgan said. “The values will continue to be upheld.”

Before the Morgans cut the ribbon, Ann Morgan spoke about her experiences at the university.

“We are truly blessed to have the University of La Verne community as our family,” Ann Morgan said.

Reed Gratz kicked off the concert on piano with Andrew Ford on bass, Mike Bennett on drums and Steve Biondo on percussion.

They played four songs that featured multiple solos and ended with a standing ovation. Many audience members could be seen tapping their feet along with the music.

Their performance got the entire audience involved.

Audience members cheered as De La Cruz tap danced along to the music and got everyone clapping along. They closed to the audience erupting into applause.

James Calhoun and The University Chorale and Chamber singers were the last performance of the night and consisted of seven men and eight women. They sang three songs while Calhoun had a solo singing “What a Wonderful World” by Louis Armstrong.

“It is a privilege to sing in this auditorium,” said Chris­topher Kaelberer, senior business administration major and also one of the featured soloists of the night.

“I never would have thought we would get this.”

“It was an honor,” said Justeen Montelong, sophomore liberal studies major. “Not everyone gets to perform for an event like this.”

The audience cheered at the end of the concert and once again gave a standing ovation.

“Nothing will be more meaningful than to have this auditorium with our name over the door,” President Morgan said.

Karlie Bettencourt can be reached at karlie.bettencourt@laverne.edu.