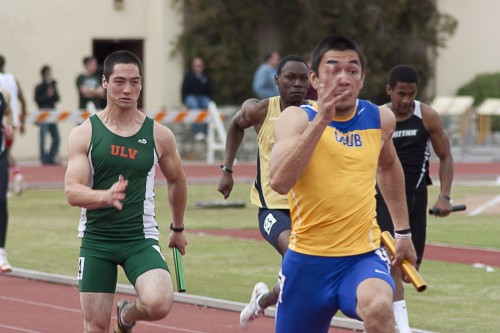 University of La Verne sophomore Andrew Connell sprints the last leg of the 4×100 meter relay against Whittier, UC Irvine and Cal State Bakersfield. Connell and his relay team of Marcus Fortugno, Chancise Watkins and Paul Turner finished in 42.18 seconds to finish sixth in the race. The Leopards finished ninth overall at the California-Nevada State Championship meet last weekend with 36 team points. The meet was hosted by Claremont-Mudd-Scripps, marking the second time this meet has not been hosted on a Division I campus. / photo by Victoria Castaneda

Track and field athletes excelled this weekend at the California-Nevada State Track and Field Championships held Saturday and Sunday at Claremont-Mudd-Scripps that featured teams from the NCAA Division I, II and III levels as well as the NAIA.

“It’s pretty awesome, coming out and people not knowing what ULV is, asking if that means Las Vegas and then telling them it’s La Verne, and not being recruited by schools coming out of high school and then showing them what I got,” Fortugno said.

It was a challenge to be able to participate in the meet at all, as each competitor had to attain qualifying times or distances to be invited.

For the defending SCIAC champion in the 400 and 200 and an All-American, it took a comeback effort to win the crown as Fortugno passed Jordan Scott of UC Santa Barbara in the final stretch, finishing in 47.53 seconds.

“The only thing that popped in my head was that I was going to be the champion,” Fortugno said.

In the 200, Fortugno battled with David Reid of Cal State Northridge and Jordan Taylor of Cal State Bakersfield, crossing the finish line in a swift 21.43 seconds.

Turner, the top-ranked long and triple jumper in Division III, faced tough competition as he faced off against the overall national leader in the triple jump and saw a good preview for nationals, finishing with a 24 3/4 leap in the long jump and a 48-10 1/4 jump in the triple jump.

On the women’s side was the 15th place 4×100-meter relay team of Lili Bolanos, Samantha Tucker, Ebony Williams and Nicole Crutchfield, who finished in 49.86 seconds.

The other women representatives for La Verne were Liz Gonzales and Clarissa Holz, who competed in the 400 hurdles.

“It’s an honor because we haven’t done this in a while. The women’s 4×100 hasn’t come to this meet in a while,” Bolanos said.

The men finished in ninth place with 36 points, whereas the women finished unranked with no points scored.

La Verne now looks to the SCIAC No. 2 meet against CMS, Redlands and Occidental at Redlands.

“We probably have the best team in SCIAC,” Turner said. “I don’t mean to be disrespectful but I think we’re going to do some work on them.”