By Alexandria Orozco, Candice Salazar on May 6, 2011 in Greek Life, LV Life 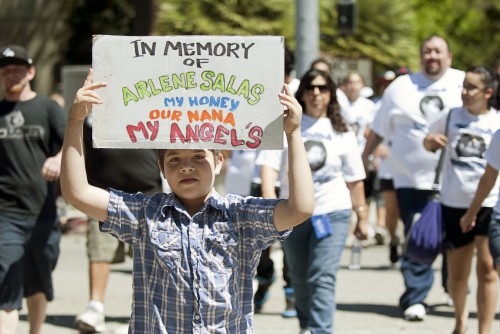 Kyle Mitchell walks with his family on Sunday to raise awareness for Amyotrophic Lateral Sclerosis, also known as Lou Gehrig’s disease. It was his fourth year participating in this event. Mitchell’s grandmother, Arlene Salas, died two years ago from the disease. / photo by Candice Salazar

People of all ages gathered on Sunday at the University Mall to participate in the Walk to Defeat Amyotrophic Lateral Sclerosis, also known as Lou Gehrig’s disease.

The area was crowded with people in colorful shirts, each representing a different team that walked in honor of a friend or family member suffering from the disease.

“I made an effort to come out here today because there is not a lot of knowledge about the disease and it is not getting the attention it needs,” participant Stephanie Lawrence said.

“This is a terrible disease because it attacks all the muscles and makes a person unable to walk and talk.”

Lawrence’s team, “Jules Angels,” began as a small group that played bunco together.

Her team grew to nearly 75 members, making it the biggest team that participated in the walk.

Two Laker Girls made an appearance to sign autographs and take pictures with walkers who came to promote awareness of ALS.

Familiar faces from various organizations on campus helped support the event by working booths and participating in the walk.

“I’m supporting Phi Delta Theta, whose main philanthropy is ALS, and I am walking in memory of my brother’s friend who suffered from the disease,” graduate student Vanessa Ocana said.

Senior Marcella Marquez participated in the walk with her family to honor her father, who battled ALS until his death in 1999. She said her sorority sisters have unconditionally supported her as well as the cause in general.

Participants gathered on the lawn of Brandt Hall to hear the opening ceremony.

The speakers explained the disease and thanked the fraternity Phi Delta Theta for playing a huge part in helping the ALS Association organize the event.

Many participants commented on the beautiful weather as they walked down Bonita Avenue past Kuns Park and back down D Street to end at the University Mall.

People of all ages from neighboring cities showed their support by participating in the walk.

Adults in electric scooters and babies pushed in strollers were among those present at the event. Some families even brought their dogs along for the walk.

Many passing cars honked their horns to show support for the walk and made walkers even more enthusiastic.

“We are essentially here walking because we want to support everyone with ALS,” Adrian Amaro, a participant who walked for Team Glo, said. “Once people know about it they will want to donate to the cause.”

As the walk came to an end, many participants took pictures with their teams in front of Founders Hall.

The optimism in the air was contagious and as walkers left campus they could not help but feel hope for finding a cure for ALS.

Alexandria Orozco can be reached at alexandria.orozco@laverne.edu.