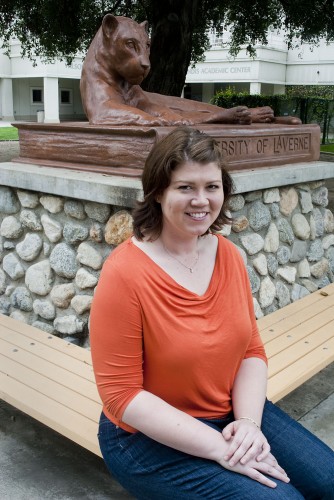 Jenna Panatier was hired in January to coach women’s volleyball. While completing her MBA at Lipscomb University, Panatier began making jewelry, a hobby she continues to enjoy. The season begins on Sept. 2 at the Pacific Coast Classic Tournament. / photo by Candice Salazar

After losing to Cal Lutheran in the Southern California Intercollegiate Athletic Confer­ence championship tournament at the end of Fall 2010, the athletics department thought that a coaching change would give the women’s volleyball team that extra push it needed to get back to the top of the conference.

Jenna Panatier was hired in January and comes with more than eight years of experience. Panatier coached at Division I Colgate University for four seasons and most recently was an assistant coach at Lipscomb University in Tennessee.

In her time at Lipscomb she helped it win the 2007 Atlantic Sun Conference title, the first in the school’s history.

“I chose ULV for the opportunity to be with people who understand the true joy of athletics and how it comes from the heart, and not for the money,” Panatier said.

Panatier coached for four seasons at SCIAC rival Occidental and improved its record from 2-20 to 16-9 and gave La Verne its only conference loss in 2000.

In 2010 the Leopards finished in a three-way tie for third place in SCIAC with a record of 8-6 and overall record of 19-11, but fell one win short of making it to the NCAA Tournament.

La Verne lost 3-0 in the final round of the SCIAC tournament to Cal Lutheran.

“I couldn’t be more excited for the season,” sophomore setter Kendall Kraiss said. “My expectations are to be more competitive in league and to make it to regionals and the NCAA Tournament.”

“We’re expecting to be a nationally renowned program again and to take SCIAC back,” sophomore outside hitter Randi Taylor-Toomay said.

The women and Panatier have already been hard at work in the weight room and on the court preparing for the upcoming season.

“They’ve been working really hard and are really dedicated,” Panatier said. “They know what needs to be done to be successful. I want them to rediscover who they are as athletes and realize that they are as good as I know they are.”

“I love it here,” Panatier added. “The people here are dedicated and I want to be surrounded by people that love what they do. I want to create an environment that allows for everybody to reach their highest potential.”

The Leopards and Panatier will begin the season at 2 p.m. on Sept. 2 against out-of-state Augsburg College at the Pacific Coast Classic Tournament in Claremont.

They will begin conference play at 7:30 p.m. Sept. 22 on the road against Caltech.

La Verne has a lot to look forward to, returning eight players from their roster of 13 from last season.

Music lives through ‘Love and Death’
Learning and language unite