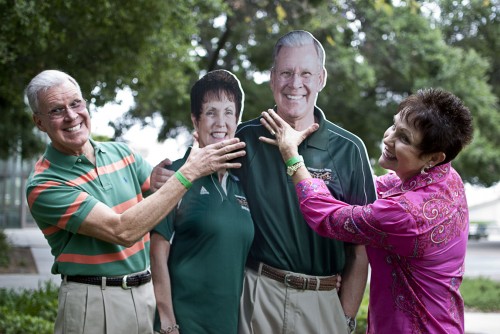 Ann and Steve Morgan were honored by the University of La Verne and the community for their contributions during the last 26 years at the Out the Door Barbecue last Saturday in Sneaky Park. The Morgans were presented with several gifts from guests that included a handmade rocking chair, bobblehead dolls, a trophy and LeoFM sweatshirts. / photo by Candice Salazar

A host of speakers, friends and community members – many donning cowboy hats, bandanas and boots – showed up to bid a final farewell to the Morgans at the Western themed “Out the Door” Barbecue Saturday.

The Morgans walked around Sneaky Park to greet friends and community members and thank them for coming.

“I am thrilled to see so many of the La Verne community here,” President Steve Morgan said. “This is a very enjoyable occasion.”

Morgan, the University’s longest serving president having been in office for 26 years, retires June 30.

“This guy has looked presidential since junior high,” said Board of Trustees member Mary Ann Melleby, who works for the Monrovia Water District.

“These are two individuals that helped the University become what it is today,” said University Spokesman Charles Bentley, who served as emcee for the open-air event.

The series of short speeches from faculty and friends of the Morgans was followed by some remarks from ASULV President Nick Sloot, who told guests of the Morgans’ plans to travel to Africa and Italy.

“I can’t say much about Italy but I’m sure in Africa they will find something familiar,” Sloot said. “There is not much of a difference between La Verne students and wildlife.”

LeoFM came out to provide the music and the radio students followed Sloot presenting the Morgans with LeoFM sweatshirts. La Verne Mayor Don Kendrick and former mayor Jon Blickenstaff also shared their memories with the Morgans.

After their speeches, the mayor and his predecessor presented the Morgans with a beautifully detailed rocking chair.

“By asking for the impossible, we have achieved the best possible with the Morgans,” Kendrick said regarding the University and city of La Verne’s working relationship.

“It has been a partnerships that has made this University successful since 1891,” Steve Morgan said.

After the speeches, the band The Ravelers played “Heart of Rock and Roll.” They followed with the song “Take this Job and Shove It.”

“It has been an honor to work under his leadership,” Alumni Relations Coordinator Malissa Hernandez said. “He is so dedicated to the students; he makes it seem effortless.”

Added Ann Morgan: “It is an honor; we are humbled that the University and community honored us in this way.”

Genesis Miranda can be reached at genesis.miranda@laverne.edu.