By John Bottala, Scott Mirimanian on September 23, 2011 in LV Life 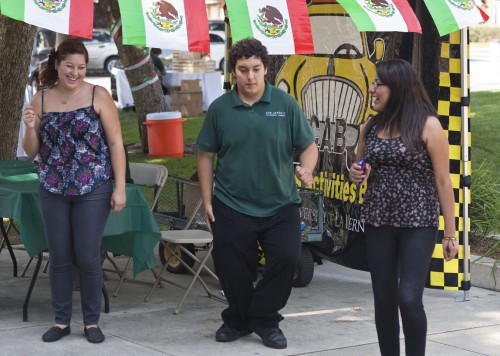 Ibis Cordero, Ramon Montoya and Ana Hernandez dance in celebration of Mexican independence from Spain. The celebration traditionally begins with the ringing of a bell and the Mexican President shouting “¡Vivá Mexico!” at 11 p.m., at the National Palace in Mexico City. The Latino Student Forum hosted the fiesta in Sneaky Park last Thursday. / photo by Scott Mirimanian

The Latino Student Forum and Campus Activities Board came together to celebrate and teach the student body about Mexican Independence Day at Sneaky Park last Thursday.

This year marked 200 years since Mexico won its independence from Spain. Many celebrate this day with parades, feasts and rodeo shows

“We are excited to celebrate and get people informed on Mexican Independence day,” Ashley Cole, junior CAB and Multicultural Chair, said.

The event attracted people by providing Latino music and free food to the first 75 commuter students.

Sneaky Park was packed with students from all different cultures curious to see what the Mexican Independence day was all about.

LSF and CAB set up information tables about the history of the event.

“The goal is to get the La Verne Community aware of the Latino culture by educating the community with history about this event,” said Rosana Chavez, a sophomore and vice president of the Latino Student Forum.

“This event is going to make the Latino students feel more at home,” Chavez said.

“I’m pretty excited about the food and the event,” junior Tim Woo said. “It is a really smart idea to offer free food and hold the event during lunchtime.”

“I am interested to see what else happens,” Woo said.

A live Mariachi band played authentic Mexican music and a game of trivia was held at the end of the celebration.

“We are going to give out some pretty cool prizes to get the students more aware of this event,” said Rachel Czarnocki, a sophomore and film chair for CAB

“The Mariachi band is a great way to show students what the Mexican culture is all about,” Chavez said.

For those interested in LSF, the group meets at 11:15 a.m. Thursdays in the President’s Dining Room.