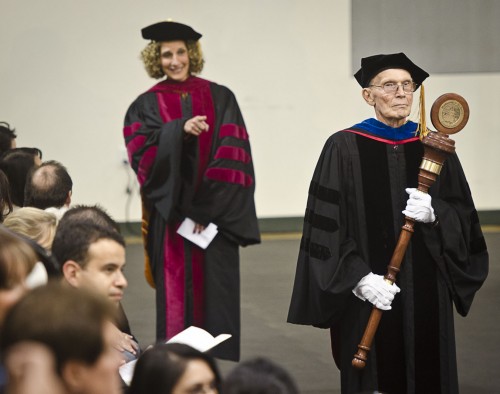 As Bob Neher, professor of biology and chair of the Natural Sciences Division leads the procession, he carries the new University mace. President Devorah Lieberman asks students and attendants to look his way. Neher wears white gloves to protect the mace from the touch of human hands. / photo by Zachary Horton

Speakers at the inauguration of President Devorah Lieberman praised her accomplishments and welcomed her to the community, but in her speech Lieberman focused on the past, present and future of the University.

Lieberman was officially inaugurated as the University’s 18th president and first woman president in its 120-year history on Friday in the Sports Science and Athletic Pavilion.

“Today is our moment, tomorrow is future,” Lieberman said in her address.

The day began with academic symposia and luncheons covering topics such as lifelong learning, spirituality, civic engagement, inclusivity and diversity with speakers from UCLA, Portland State Uni­versity and UC Riverside. 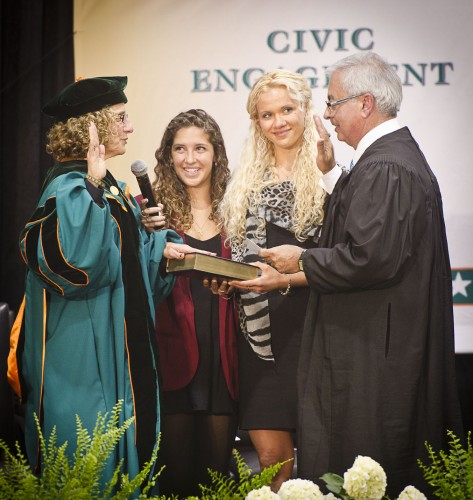 Presiding justice Manual A. Ramirez and President Devorah Lieberman raise their right hands during the oath of office. Lieberman’s daughters, Allie Lieberman-Auerbach and Emery Lieberman-Auerbach, helped to hold the Bible and a microphone. / Zachary Horton

“You join us not only as our president, but as our colleague…on behalf of the entire faculty it is my honor to welcome you and your beautiful family to our beautiful family, the University of La Verne,” said Sharon Davis, professor of sociology in her greeting from the faculty.

Lieberman glowed with excitement as she sat on stage, a smile on her face throughout the entire ceremony.

“She is both primed and ready to be an inclusive and generous leader,” Guarasci said in his introduction of his former provost.

“If you haven’t noticed, and I’m sure you have, she enjoys being everywhere on campus,” Guarasci said.

Luis Faura, chairman of the Board of Trustees, and Mary Ann Melleby, a member of the Board, helped Lieberman in the robing ceremony, where she removed the red robes of Wagner College to don the green robes of La Verne. After she put the robes on, she spun around to show the audience and bowed slightly. 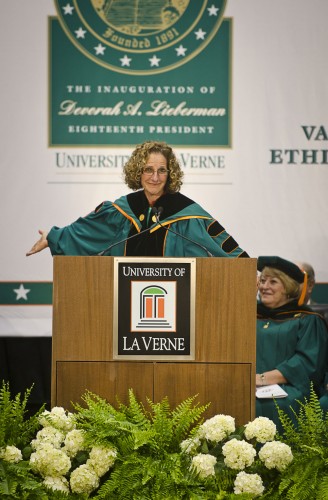 President Devorah Lieberman thanks her family, including her husband, Roger Auerbach, for their support at her inauguration Friday. She is the University’s first woman president. / Zachary Horton

Next, white-gloved Professor of Biology Bob Neher presented Lieberman with the large wooden mace of the University.

As Ramirez gave Lieberman the oath of office, her daughters Allie and Emery Lieberman-Auerbach flanked her.

“I, Devorah Lieberman, with all of my heart solemnly pledge to the students, faculty, staff, trustees, alumni and other friends of the University of La Verne to uphold the mission of the University and to promote community, excellence and inclusivity as I fulfill my duties functions and responsibilities as the 18th president of this great University,” Lieberman said with emphasis on “great.”

As Lieberman delivered her inaugural address she spoke less about her own accomplishments and more about the University, its history, its alumni, diversity and its future.

She mentioned notable alumni such as Luz Villarreal who is now a producer for NBC Dateline, Peggy Redman, director of teacher education, and Ashley Hughes and her grandmother Linda Hughes among others.

“More superintendents of schools in California have received their doctorates in education from the University of La Verne than from any other institution,” Lieberman said.

She mentioned other accomplishments such the two multi-million dollar federal grants the school received for curricular development in math, science and engineering, the debate team, which continues to be successful.

“We are one diversity of four colleges on 10 different campuses…our student body reflects the new urban diversity emerging in the United States,” Lieberman said.

“Forty percent is Latino, 10 percent is African-American and nearly five percent is Asian…Take a moment and look around this room; the diversity we you see in our students today reflects the diversity I’m anticipating that will sweep across this country in just a short time.”

The University’s forthcoming “20/20 Vision” plan was also further cemented in her speech. The plan calls to anticipate the needs of our diverse student body and to teach them the skills they need to lead their community.

“It is earnest when I say: strap on your seatbelts, La Verne’s 20/20 Vision is the blueprint for the near and the long term.”

After her speech, University Chaplain Zandra Wagoner welcomed leaders of multiple faiths to the stage for the benediction.

The ceremony ended with the Alma Mater and performances from the University chamber singers and chorale. 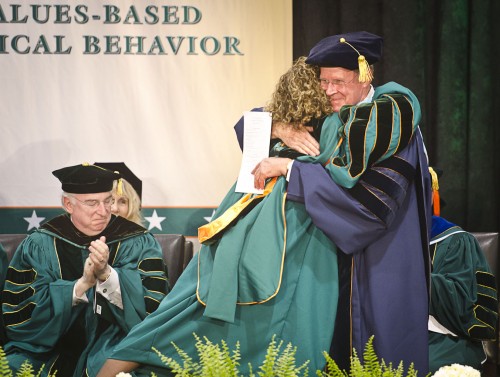 After being sworn in, President Devorah Lieberman is congratulated by former La Verne President Steve Morgan. To the left, Richard Guarasci, president of Wagner College, adds his appreciation. / photo by Zachary Horton 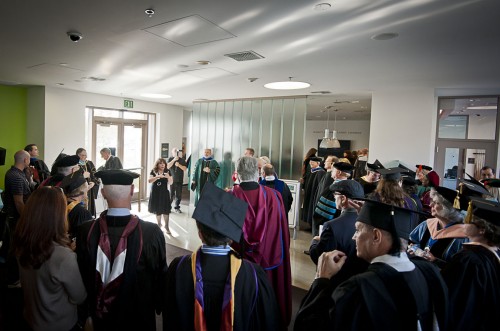