By Candice Salazar, Christina Collins Burton on October 7, 2011 in News 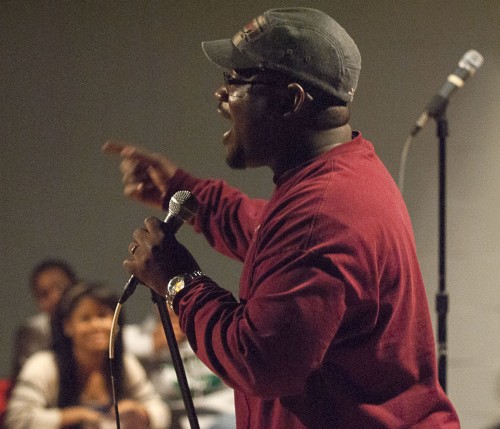 Cory Cofer, who goes by the stage name Besskepp, is a special education algebra teacher and adviser for the Poetry Club at Nogales High School in Rowland Heights. Cofer shared several poems for Open Mic in the Cabaret Theatre on Sept. 29. He has been hosting “A Mic and Dim Lights” events at the Cal Poly Downtown Arts Theater at the Pomona Arts Colony every Thursday for 11 years. / photo by Candice Salazar

Guests shared an evening of poetry and music about pride and overcoming oppression with the Black Student Union’s open mic night which featured special guest Besskepp.

“It is so encouraging,” Lynesha Williams, current BSU president, said.” “People get inspired every time and getting the chance to hear new talents is always good.”

The eager audience filled every seat and stood along the back walls of the Jane Dibbell Cabaret Theater for a chance to hear first time and seasoned speakers share their poetry.

The night opened with the first-time speaker Eric Espinoza starting the evening off with a charming poem about meeting a stranger for the first time.

“My inspiration comes from my life,” Espinoza said. “I had talked to a stranger and wrote about this scenario about someone just being a complete flirt.”

The evening’s host, DeAntwann Johnson, kept the flow of speakers steady by sharing some of his own poetry as well as giving a warm welcome to every guest that took the stage.

Johnson has been an active member of BSU for three years and graduates in spring 2012.

This was his third time hosting the open mic event for the organization.

He encouraged everyone to participate either through poetry or song.

“I want people to have a place to express themselves and to just let go of everything that is outside this area,” Johnson said.

BSU’s special guest poet Corey “Besskepp” Cofer eased onto the stage with a poem that introduced himself in different aspects of his life.

Cofer is a La Verne alumnus who graduated in 1997 a degree in education and has been awarded teacher of the year in his first five years of teaching.

Guests snapped and applauded as Cofer provided background information to one of his most powerful poems of the evening.

“We were supposed to write about a time that changed our lives,” Cofer said.

As he began he had the audience sing “Pomp and Circumstance” and started talking about waiting to hear his name called for his master’s degree.

The way he described the pride in his mother’s eyes and the huge accomplishment he felt by receiving his degree had many audience members snapping in praise.

As Cofer left the stage, the cabaret continued in applause and several more people volunteered to share their work.

“We had a list of five people and once we got going we had people just get up there and spit, with an audience like this, you just want to relate,” Johnson said.

The audience only got more active as the evening continued.

As artists sang and spoke the rest of the night, the audience applauded loudly and praised each individual’s work.

“It is inspiring to learn about the black community because they are often silenced,” La Verne alumna Jazmyne Lewis said.

“The civil rights movement was a big deal for us, now we’re able to express ourselves in a new light.”

BSU is open to anyone wanting to participate and has meetings from 2 p.m. to 3 p.m. every Wednesday in the Landis Academic Center room 104.