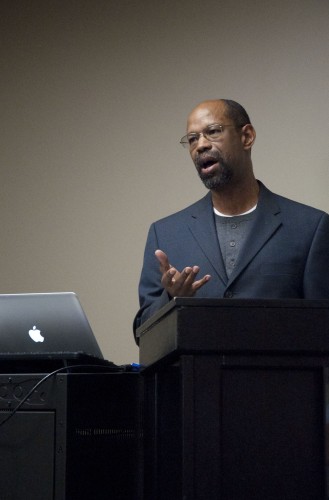 Richard Rose, professor of religion and philosophy, discussed religious pluralism in African-American seminaries. He is currently working on a book titled “20th Century African American Thinkers and Functional Pluralism.” The Monday afternoon lecture, held in the President’s Dining Room, was part of the faculty lecture series. / photo by Denisse Leung

Richard Rose, professor of religion and philosophy, captivated an audience of more than 45 students and faculty with his lecture “The Current Flow of Religious Pluralism in African-American Seminaries.”

The lecture, which was part of the faculty lecture series, was held at noon on Monday in the President’s Dining Room.

“Cultural and intellectual understanding of other religions, along with profound pastoral instincts are increasingly essential for theological studies as well as for those engaged in the academic study of teaching a religion,” Rose said.

In 2009 the Parliament of Religions developed a program called “Educating Religious Leaders for a Multi-Religious World.”

“Of the 15 seminaries represented, none of them were from seminaries that have traditionally served the African-American church community,” Rose said.

Rose researched the mission and vision statements of the schools invited to participate and compared them with schools that have traditionally served the African-American church community.

The schools involved in the program included the Howard University School of Divinity and the Interdenominational Theological Center.

“The mission and vision statements of the African-American schools, as expected, expresses a strong commitment to the religious and cultural heritage of African-Americans,” Rose said.

“But what you will not notice here, is these schools do not make exquisite reference to interfaith, interreligious, multi-faith, religious pluralism, or a specific need for the understanding of religious traditions outside of Christianity.”

Rose then sat with a focus group at Howard University and discussed what they considered important in religious leaders teachings.

“Today’s students are coming to seminary with a set of questions that grow out of the curiosity stimulated by a diverse and pluralistic society,” Rose said.

While conducting research, Rose found an article from a professor at Princeton University highlighting three reasons why the black church is considered dead.

After reading the article Rose decided to change the path of his research.

“I was trying to find some way to get students excited again about doing ministry,” Rose said.

He concluded the lecture with a critique of the argument from the Princeton article.

Since the conclusion of his research, Rose has begun spin-off projects that include inviting Bishop Carlton Pearson to lecture in March on “The Gospel of Inclusion.”

“I thought it was very interesting, I like that the focus that he’s taking on multiple faiths and Dr. Rose brought interesting insights into a focused part of the Christian experience,” said Sharilyn Berry, development director at the La Verne College of Law.

“Religion has become such an irrelevant part of society, it’s important to bring together religions so that you can spark an interest,” senior psychology major Monique Guzman said.

“To get along, you have to kind of understand where that person is coming from so understanding their religion, is important so you don’t misjudge what their actions are and what they believe in,” La Verne alumnus Nicholas Weeks said.