By Daniel Hargis, Denisse Leung on November 4, 2011 in Soccer, Sports 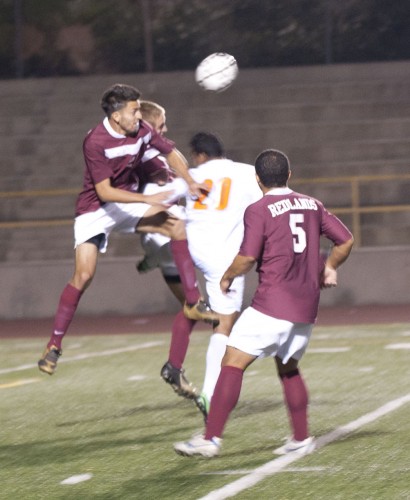 The men’s soccer team went head-to-head with Redlands on Saturday. During the second half Bulldog sophomore defender Richie Marquez strikes a header with freshman midfielder Nico Johnson (No. 5) as his backup. Leopard sophomore forward Abdullah Alharshan is involved in the play, trying to stop Marquez. The Leopards were shut out by the visiting Bulldogs 3-0, who won the regular season Southern California Intercollegiate Athletic Conference championship for the second consecutive year. La Verne finished their season with a 6-9-1 overall record and 5-8-1 in conference play, good for fifth place overall. / photo by Denisse Leung

With leopard print balloons crowding the scorer’s table, the men’s soccer team faced the conference champion Redlands Bulldogs, walking away with a 3-0 loss.

La Verne played with the repeat Southern California Intercollegiate Athletic Confer­ence champion throughout, earning chances against the best, but could not finish in the season finale combined with senior night.

“It has been an up and down season,” head coach Cres Gonzalez said.

“We had some good games and we hope the future will change and we can play for all of the season, not part of it.”

From the opening whistle, the Leopards competed with the Bulldogs in every facet of the game.

Redlands exhibited a tremendous amount of skill, they were able to use smart passes to pick apart the La Verne defense but the defenders and junior goalkeeper Richard Duran always came through to extinguish the flame.

In the 31st minute Bulldog goalkeeper Andreas Silva tried to kick the ball away from his goal.

On the way out junior forward Hector Lepe deflected the ball right back towards the goal and past Silva, however it trotted wide.

That moment symbolized the entire game.

Back and forth play between the two teams eventually led to the Bulldogs striking first.

In the 36th minute Redlands freshman midfielder Matej Kustura received the ball in the middle, dribbled it towards the left, and took a left-footed shot from 23 yards out.

Duran, who lunged as best as he could to the upper right corner of the goal, could not poke it wide.

La Verne might have seen their best chance in the 37th minute after Silva, a First Team All-SCIAC honoree from a year ago, made a save that left a friendly rebound for sophomore forward Joshua Hill to put home.

Unfortunately Hill pushed the ball across the face of the wide-open goal.

“You can play the greatest game of your life but it doesn’t matter if you can’t put the ball in the net,” senior defender Brandon Friedel said.

The Leopards were able to hold the deficit at 1-0 going into the halftime break due in part by strong defending by senior defender Wesley Lucas.

His play was highlighted by a nice defensive series along the goal line where he was able to prevent a corner for the Bulldogs and cleared the ball away from any danger with only a minute remaining in the half.

The halftime break was used mostly for celebrations rather than advising.

Each player took a leopard print balloon and flowers and found their parents along the stadium railing to give to them.

Immediately after, both Lucas and Friedel as well as Paul Alvarez, professor of movement and sports science, were honored with framed jerseys and a celebratory word about each.

At the start of the second half, La Verne looked ready to tie the game.

Sophomore midfielder Ryan Estrada had a lot of chances and created many, beginning with a shot in the 49th minute that sailed just high of the goal.

He also received a pass from sophomore midfielder Fernando Almejo and again sent the ball high in the 54th minute.

The Leopards missed their best chance to tie the game when sophomore forward Abdullah Alharshan found the ball at his feet after an initial save by Silva eight yards out.

In a horrible turn of events, Alharshan kicked the equalizer over, following the words of Friedel.

“We were controlling the game,” Almejo said. “We were applying all of what the coach said. It was unlucky that we didn’t get the result.”

Redlands doubled the lead in the 79th when junior forward Alex Laughton finished a broken play.

Five minutes later the Bulldogs sealed the victory when Kustura threw the ball in over a scrum of Leopards and Bulldogs.

It was tipped by Duran and then pounded home by sophomore midfielder Will Walker.

“This was probably the best game La Verne has played all season,” Lucas said. “Posses­sion, shots, everything was even but they were able to put theirs away.”

Although the result was disappointing, Lucas and Friedel only had positive things to say about the program as a whole.

“I have no regrets,” Lucas said. “My time at La Verne was well spent. I had a great time playing with my teammates and coaches and for the fans. I wouldn’t take back anything.”

“I’ve made a lot of lifelong friends here,” Friedel said. “I hope they make it to playoffs next year because we’re that talented. We just need to get over the bump. I love this program.”