By Anthony Juarez, Campus Times Editorial Board on November 18, 2011 in Editorials, Opinions 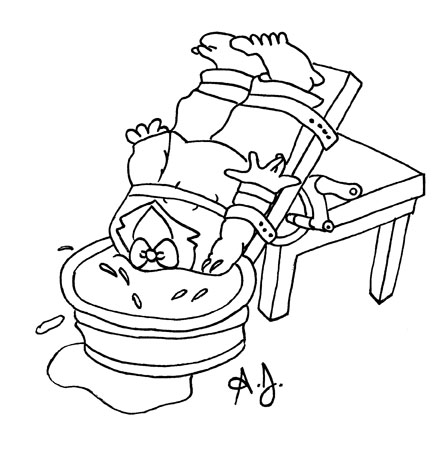 Republican candidates at the foreign policy debate on Saturday were asked to share their views on torture. This question segued into their views on waterboarding. Both Congresswoman Michele Bachmann and Herman Cain said that if elected, they would return to the practice of waterboarding as an interrogation technique.

Cain insisted the practice was an “enhanced interrogation” technique and said that he would leave the policy in the hands of the military to define what actually falls under the definition of torture.

“If I were president I would be willing to use waterboarding. I think it was very effective; it gained information for our country,” Bachmann said.

The bottom line is that waterboarding is a form of torture.

Waterboarding involves strapping the person in question down to a board and placing a cloth over their face. Water is then poured onto their faces to simulate drowning, causing them to choke.

Senators Ron Paul and John McCain were correct when they said that waterboarding is not a surefire way to collect information.

Only one instance where important information was found comes to mind. When Khaild Sheikh Mohammed was waterboarded 183 times he gave up information about a courier of Osama bin Laden. This is only one case where waterboarding proved to be successful.

“If you put enough physical pain on somebody, they will tell you whatever they think that you want to hear in order for the pain to stop,” McCain said in an interview with CNN.

Many scholars feel that waterboarding violates

Common Article Three of the Geneva Convention. The article states that those who are no longer directly involved in conflict should be treated humanely.

This would include many accused of terrorism who were prisoners of war; since they are not directly involved in the war the article says that they should be treated humanely, and waterboarding is inhumane.

The United States had Japanese military personnel prosecuted after WWII for waterboarding American prisoners of war.

We cannot criminalize waterboarding and then condone the practice in less than a century just to suit our own needs.

Even in 2011, if an American solider was subjected to waterboarding overseas, Cain, Bachmann and all those in favor of the practice would probably change their tune.

What Bachmann and Cain are suggesting is that they are pro-torture and they will not play by the rules of international law.

As Americans we cannot condone torture as a means of gaining information from criminals, even those accused of terrorism. As Ron Paul said, it is immoral, impractical and illegal.