By Allison Lavelle, Cameron Barr on November 4, 2011 in LV Life 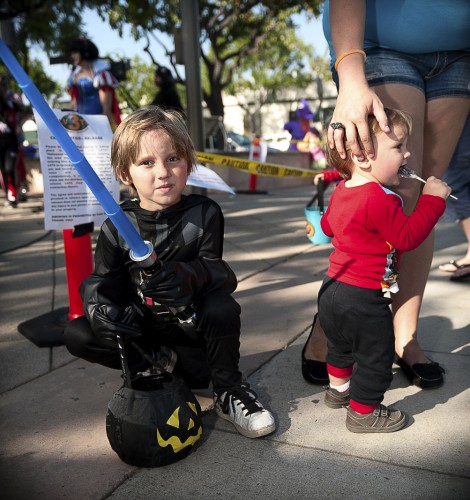 Cousins Parker (Darth Vader) and Will (dressed in a Cars Shirt), were brought to La Verne’s annual Trick or Treat Festival by their grandmother, Sheryl Roy. Roy said they have attended this event for the past four years. Employees in the shops of downtown La Verne hand out candy to children in costume to celebrate the event. / photo by Cameron Barr

Darth Vader and Boba Fett held hands as they walked down the sidewalk on D Street and collected candy from store owners.

Merchants sat outside their stores Monday afternoon and admired the array of ghouls while handing out treats.

Every Halloween, local families are invited to the Old Town La Verne Merchants Safe Trick-or-Treating event to show off their costumes and stock up on pounds of candy.

“This event is a force to be reckoned with,” Sasha Schonfeld, who has worked at Warehouse Pizza for four years, said. “There are swarms of children everywhere and it’s hard to drive down Bonita.”

Schonfeld sat in a chair on the sidewalk with a five gallon bucket full of candy that had already been half-emptied, while complimenting the various costumes of the hundreds of children who came to the restaurant.

Kenny Schonfeld, owner of Warehouse Pizza, has participated in the event since it started and was excited about the success it continues to have each year.

Michele Cochran, office manager of La Verne Optometry, enthusiastically handed out candy to trick-or-treaters while dressed as a witch.

“The last few years it was on a weekend and we couldn’t do it, so we’re glad it’s on a weekday this year,” Cochran said. “Plus, now we don’t have to work.”

La Verne Community Television also brought their live annual Halloween show to Mainiero Square for the third year in a row as part of the afternoon’s celebration.

From 2:30 p.m. to 4:30 p.m. the “Halloween Spooktacular 2011” engaged passersby with handfuls of candy, silly Halloween jokes and interviews with kids about their costumes.

The show was hosted by former Miss La Verne Jennifer Barlow and La Verne senior and broadcast journalism major Daniella Villegas, who were dressed for the occasion as Marge Simpson and Iron Man.

Barlow went to Bonita High School and has taken part in LVTV’s Spooktacular since being named Miss La Verne in 2005.

“I love the kids and seeing their happy faces as they get candy,” Barlow said. “For some of them it is their first time on television and it’s fun seeing their reaction to it. I love being active in this community.”

Also during “Halloween Spooktacular 2011” the city gave out prizes to the creative winners of a coloring contest that took place in public schools. The contest was open for students 12 years of age and younger.

One of the contest winners was 4-year-old La Verne resident Mackenna Paul who was dressed as Strawberry Shortcake and accompanied by her mother, Brittney Paul.

Mackenna Paul received a bag full of prizes, which included a gift certificate to the recently opened Granny’s Yogurt and art supplies to help further fuel her talent.

“I won free yogurt, money and coloring stuff,” Mackenna Paul said. “I want to go home and open them today.”

Brittney Paul, who had never been to the trick-or-treating event before, was enchanted by what she had experienced.

“I think it’s darling and the epitome of a small town community,” Brittney Paul said.