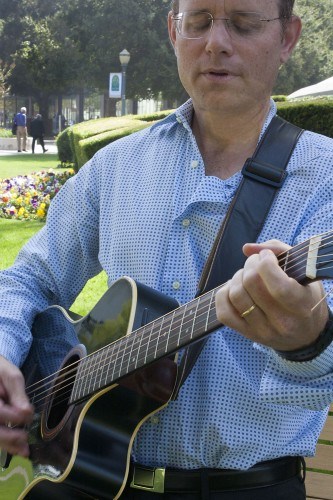 Artists are often seen penetrating other realms of society through use of their craft, and Kenneth Marcus, professor of history, has dedicated his work to research this impact on history.

Being a musician in his own right, Marcus is able to look at history through a lens he thoroughly understands.

“One can study history through culture and that’s his specialty,” Kathy Lamkin, professor of music, said.

Marcus and Lamkin taught a course on the very subject of analyzing musical works that reflect a particular time period.

Marcus said that he has always been fascinated with the cultural history of California, specifically the depth found in Southern California.

“There is a wide diversity of arts because (Los Angeles) is an immigrant city,” Marcus said. “People from different places in the world explore their art here.”

In a work recently submitted for publication, Marcus explores the cultural crossroads that is Los Angeles. “Moving Together: Race and Ballet in Postwar Los Angeles” discusses an African American classical ballet group that formed after World War II, and through their existence challenged the racial restrictions of the time period.

“They were trying to create something never seen,” Marcus said. Through this novelty act, great strides were made in the civil rights movement that would later allow for grander opportunities.

“They did something different with the arts, and on one hand were accepted and on the other restricted.”

“These restrictions started falling away and suddenly there were opportunities,” Marcus said.

Through studying art, Marcus is able to better understand cultural landscapes and then apply this knowledge on an international scale.

An example of history being looked at on an international level is seen in the Modernist Movement that lasted from the late 1800s to the middle of the 1900s.

Marcus said the Modernist movement attracted artists from all over the world and they later landed in Los Angeles, bringing with them information and traditions unique to their culture.

Marcus currently teaches a course that focuses on Europe in the 19th century, a time when art was flourishing not just for the elite but for the masses as well.

“When talking about culture and class conflict at the time, arts are important ways of looking at issues and piecing out themes,” Marcus said.

“What artists are doing is constantly reflecting on society,” Lamkin said.

Marcus said that artists often become major figures in society because they have something to say about their cultural environment.

“It’s wonderful to study culture through music, arts and history because it all goes together,” Lamkin said.

On Nov. 12 at the Paderewski Festival in Paso Robles, Marcus will discuss California artists and the important impact they have on the research and teachings of Los Angeles history.

“Two people (may not) agree on politics, but they uphold certain artists as something that they can agree on,” Marcus said.