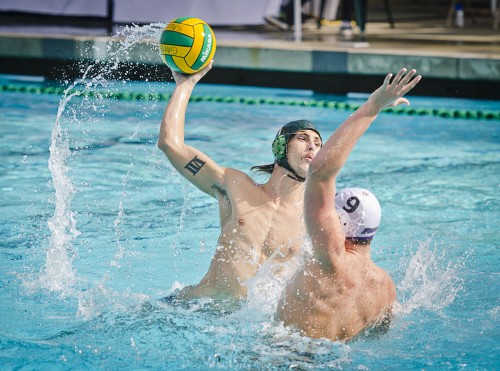 In La Verne’s final game of the SCIAC championship tournament, senior utility Kyle Thorsness explodes out of the water to shoot over his defender, junior utility player Cameron Rehm of Whittier. Thorsness, a senior who transferred from Orange Coast College, played his last championship tournament and last game at Las Flores Park. He scored three goals in each game and became the first La Verne player in five years to earn First Team All-SCIAC honors. / photo by Zachary Horton

La Verne finished the Southern California Intercol­legiate Athletic Conference with a 3-7 record and placed sixth in the tournament with a 1-2 record.

“We came in as the fifth seed, which is the highest we’ve been seeded since I’ve been here,” junior utility Arturo Villalpando said.

The Leopards’ first match was against the fourth ranked Cal Lutheran Kingsmen.

At the end of the first period the underdog Leopards sent a message to the Kingsmen. The score was tied 2-2 and the aggressive Leopards were looking to pull the upset.

“We came out a little under the radar, but when we almost pulled the upset against Cal Lu I think people started to notice us,” freshman utility Julian Casillas said.

Going into halftime the Leopards trailed the Kingsmen 6-4.

Coming into the third the Kingsmen were able to get two quick scores which forced the Leopards to take an early timeout.

After the stop Villalpando swam down the pool and scored another, which brought the Leopards back within two.

“We proved something this weekend,” coach Alex La said. “We proved that hard work will keep you in games and make up for our inexperience.”

The goal brought La Verne fans out of their seats and got the players pumped.

Freshman goalie Dan Newell, who was selected to the All-WWPA Freshman Team, made great saves on the Kingsmen’s six-on-five power plays.

Thorsness scored the final goal of the third period, but La Verne still trailed 9-7. Thorsness had three goals on the day.

The Leopards were not able to produce any offense in the fourth period and lost to the Kingsmen 11-7.

The next day the Leopards faced the eighth seeded Caltech Beavers.

La Verne grabbed momentum late in a high scoring first period, jumping out to an 8-4 lead over the Beavers.

La Verne was relentless with their scoring in the second period, outscoring the Beavers 6-2, leaving them with a halftime lead of 14-6.

Eleven different players found the back of the net during the game.

“I don’t think any team in the conference wants to play us because we’re always battling back and staying in the game,” La said.

The win put the Leopards in the fifth place game against the Whittier Poets.

After one period of play the game was close, but La Verne trailed 3-2.

“Our lack of experience causes holes and forces us to battle back from behind,” La said. “We play a lot of freshman, but with leaders like Emerson (Gant), Thorsness and (Andrew) Mackay who bring so many intangibles and different aspects to the game it’s easy to get back and compete.”

The stands were filled for the third straight day of the tournament and the game did not disappoint.

The game ended with an exciting turn of events and the Leopards came back in the fourth period.

Whittier scored with 22 seconds remaining on a shot that was deflected by the defense to take the win and the fifth place spot in the SCIAC tournament.

“They scored off a field block that ended up going through the goal, if you ask me that was luck,” La said.

The winner of the tournament receives an automatic bid to the NCAA Final Four.