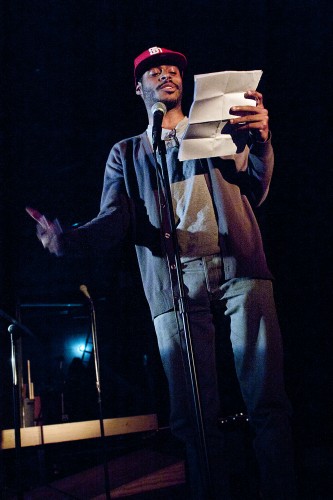 The lights dimmed as a man warmed up his guitar on the stage, creating the feel of a small jazz club.

The audience was starting to fill in the venue for Open Mic Night.

“Ever since I have been here on campus, I have tried to get poetry and Open Mic Night here on campus, and this is now our fourth one,” DeAntwann Johnson, senior movement and sports science major, said.

“It is overwhelming. After the first one, it was unreal,” Johnson said.

Johnson was the host of the night for the performances.

The list of performers consisted of poets, rappers, singers, and musicians.

Jordan Randall started off the night with an acoustic cover of rapper Lil Wayne’s “How to Love.” The audience sang along during his performance of the song.

Shannon Garcia recited a poem she wrote about the deaths that take place out in the streets with symbolic references such as the stop sign.

The intensity of her voice drew the audience in closer.

Phillip Greenwood, freshman music major, and his band Five Lane Highway rocked out for the audience with their own original music.

The band was given a standing ovation at the end of their set.

“Music is poetry too,” Greenwood said.

Greenwood hopes for his band to make it big one day.

“La Verne is not big, so we want to make our mark,” Greenwood said.

Jetske Wauran, a junior, performed a rendition of Elvis Presley’s “Can’t Stop Falling in Love with You,”and sang two original songs of her own.

“I love performing for Open Mic Night. It gives us a chance to perform and express ourselves,” Wauran Said.

One of the most unique performances was a beat boxer who went by the stage name “Noise.”

Noise beat-boxed music from the Donkey Kong video game, by Michael Jackson, and imitated the voice of Elmo from “Sesame Street” with a harmonica.

Salazar sang three original untitled pieces of her own. At the end of Salazar’s set, the audience cheered for an encore from her.

The audience gave Salazar a standing ovation after her final performance, chanting for another song.

Katherine took the stage and gave off intensity with her words as she read her poetry of memories in her life to the audience.

She spoke about her first lesbian experience to almost being mugged at a bus stop in Long Beach over a month ago.

A man in the audience was on the verge of tears while Katherine shared when she gripped a pair of scissors as a means to protect herself.

The night was not just an event to present some of La Verne’s performing talents, but to make some big announcements as well.

The University has now recognized the poetry club as an official club on campus.

Also, La Verne will host a poetry slam competition in the spring semester with the poetry club’s slam team.

At the end of the night, Johnson wanted to leave with the audience with a brief outro poem he always says at the end of each Open Mic Night.

“Surround yourself by people who encourage you,” Johnson said.

“Live for today because tomorrow leaves no promise. I do not want to preach to you, I want to enlighten you,”

Anthony Juarez can be contacted at anthony.juarez@laverne.edu.

Leopards swim to sixth in SCIAC
Raise endowment, not tuition