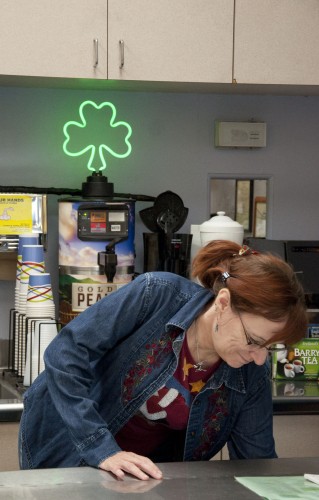 Wendy Connolly is an Irish dancer and musician from Cerritos who met her husband Paul Connolly in Dublin, Ireland. After moving back to the United States the couple decided to open Connolly’s Kitchen in March, 2010. The most preferred dishes by customers include fish and chips and Irish stew. Connolly’s Kitchen is located at 1453 Foothill Blvd. in La Verne. / photo by Denisse Leung

Since Connolly’s Kitchen opened its doors in March, the La Verne restaurant has been serving up Irish culture as strong and as rich as its food.

“It’s important that people know what they get here is authentic and credible Irish fare,” said co-owner of Connolly’s Kitchen, Wendy Connolly.

Connolly visited Ireland in 2005, immersing herself in the culture and documenting much of her trip in photographs, which are displayed throughout the restaurant at 1453 Foothill Blvd.

It was there that she met her husband, Paul, and when the two married and returned to the United States, they both longed for the flavors of Ireland.

“Paul missed a lot of the food from Ireland. That definitely encouraged us to open the restaurant.” Connolly said.

Connolly’s Kitchen goes beyond simply providing traditionally Irish meals because they also work to immerse their customers in the culture of the country.

Lively Irish music permeates the store. Celtic crosses dot the wall. The cooler is filled with imported sodas only seen in Ireland.

The interior decor of the store has a very home-like feel. From the lace drapes to the faux fireplace in the corner, it is not hard for the customer to imagine that they are dining in a friends kitchen.

“We can’t help but come here and reminisce about our trip to Ireland,” said patron Jim Prunty. “They do a good job of capturing Ireland (…) here.”

Connolly says that she has often been told by customers that have been to European countries, that they cannot help be drawn back to the memories made on those trips after stepping into the establishment.

Of course the strong Irish heritage would only take the eatery so far if the food was not of strong quality, and Connolly’s Kitchen prides itself on its sausage sandwiches, large fish cods and other authentic Irish meals.

“The food is what gets me to come back every time,” Prunty said.

“The traditional Irish soup, the potatoes, it’s all great. But without a doubt, the gin sundae is the best.”

“I really want to start coming her more. There aren’t that many great fish places in this area,” said restaurant attendee George Quinn.

“With fast food, customers are provided cheap food from people they don’t know,” Connolly said. “That’s not us. That’s not what we want to provide. We want to make this a very personal place for anyone who arrives.”

Though they have just opened, the restaurant continues to grow. Connolly’s Kitchen has already built up a steady stream of regular customers that are becoming familiar with their menu.

“We’ve got a good customer base since we opened,” Connolly said. “Since we’re kind of hidden we need to work to make ourselves known. We’re going to start opening up catering services which should help out our visibility.”

Connolly says that she would like the restaurant to eventually be know for “excellent homemade food and pleasant, friendly environment that has the spirit of a great country.”