By Allison Lavelle, Denisse Leung on December 9, 2011 in News 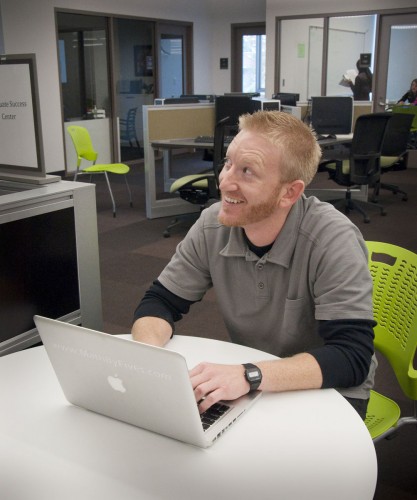 Adjunct Professor of Math Frank Ives finishes his tutoring schedule at the Academic Success Center. Ives is recognized for his entertaining teaching style and YouTube math videos. He is currently working on a book titled “Confessions of a Teachaholic,” scheduled for publication later this month. Ives has also taught at Cal Poly Pomona for the last 10 years. / photo by Denisse Leung

Frank Ives is one of the most animated and liked instructors on campus, but becoming a math professor was not always in his plan.

While Ives was earning his bachelor’s degree in mathematics and statistics and master’s degree in statistics from Cal Poly Pomona, the school made him an offer he could not refuse: they would pay his tuition in exchange for teaching a couple classes.

“I started teaching math and I really couldn’t see myself doing anything else,” Ives said.

Ives has been an Instructor of Mathematics at La Verne for the past two years, but has been teaching for the past 10 years. He is also currently a professor at Cal Poly Pomona.

Ives also had a brief stint working for the government in 2006 when he moved to Iowa for a few months and did agricultural statistics.

“I was literally a bean counter,” Ives said.

With teaching as his true calling, Ives wants to create a more positive image for mathematics and make it fun and easy for students to learn.

He began to make videos teaching everything from basic arithmetic to differential equations and post them on YouTube under the channel name Math By Fives, with “fives” coming from his first initial and last name.

Originally the idea came from his early teaching days at Cal Poly Pomona when furlough days were going to make it impossible for Ives to complete the course in the given amount of time.

He made the videos to supplement what his students would have learned on the missing days.

“You can learn anything from YouTube, why not math?” Ives said.

One of Ives’ videos features an explanation of his “box and flower” method of finishing a math problem with a positive feeling.

When a solution to the problem is reached, Ives draws a box around the answer that has a flower, which is actually a polar graph, growing out of it.

“It just happened one day in a trig class,” Ives said. “(The students) got a kick out of it and it spread like wildflowers.”

Currently Ives’ channel has 275 videos with over a quarter of a million views and high school teachers from Rancho Cucamonga, Missouri, Michigan and Ohio are among some of the people who use the videos to teach and learn math.

Any of Ives’ students will say that his personality and animated style of teaching keeps them involved in the class and paying attention.

“How animated he is keeps everyone wanting to learn,” freshman Jenny Peterson said. “I think using technology is a good way of helping students learn.”

This exuberance shows not only in his videos, but in the classroom as well.

As he writes out and solves equations on the white board in his classroom, Ives speaks in different voices, makes pop culture references and sings songs that apply to the problem at hand.

When Ives gets to the end of a problem he utters the phrase “finish him” as if he is about to earn a fatality in Mortal Kombat.

Ives noted that teaching with pop culture just happened upon him one day and its success with students made him decide to continue using it.

“You have to remain relevant because so many people have lost touch,” Ives said. “You need to connect with your students.”

“I like how he comes up with silly ways to explain how a problem works,” Corrao said. “He relates it to pop culture or a certain song and it helps us remember.”

Ives believes that everyone should have access to a quality and affordable education that is rich in information but is also entertaining so students will remain engaged and want to learn.

“Teaching is evolving and if you can’t keep up with it, you can’t keep relevant,” Ives said. “You should use all the tools available to help your students learn.”