By Campus Times Editorial Board, Jason D. Cox on March 9, 2012 in Editorials, Opinions 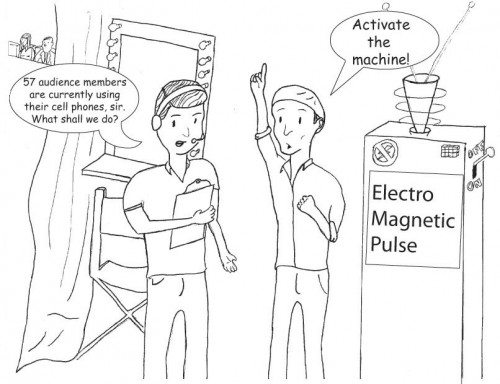 There is nothing more annoying than being in a theater with a person who lights up the darkness with the blue glow of their smart phone. Or even worse, when they answer a call and hold an entire conversation during the most serious part of the story.

In every theater there are signs and announcements asking audiences to put cell phones on silent and refrain from using them during the show, a simple request that is continually ignored by people who lack common courtesy.

During last month’s performance of “Three Penny Opera” in Dailey Theatre, audience members were kindly asked to turn off their cell phones for the duration of the performance. Not only was this asked as an act of consideration, cell phones create noise distortion that can be heard in the theater’s sound system.

When someone was caught using their phone, a spotlight was placed on them until they put it away.

While this is an amusing and effective deterrent from distracting the actors and patrons with phone use, it is not enough to fully halt rudeness in theaters. It also creates an even bigger disturbance by creating an even brighter, more noticeable light in the audience.

Kindly asking disruptive theater patrons to be more respectful is not deterring the behavior and stronger consequences need to be established.

No tolerance policies need to be instated and enforced to make a difference and make disrespectful people aware that their self-important and rude behavior is completely unacceptable.

If a manager or usher needs to ask a person to be quiet or stop using their phone, the perpetrator should simply be removed, instead of warned, without receiving a refund for their ticket.

If it is assured that there will be definite consequences for being inconsiderate, theatergoers will be more likely to turn off their phones and be respectful of everyone around them.

This type of blatant disregard and lack of consideration for other people speaks volumes about today’s society. In a world where everyone is constantly connected to each other through electronics, thoughtfulness for those who are physically present is deteriorating. People are becoming more concerned with what is going on elsewhere than what is happening right in front of them.

It is extremely sad that there are people who cannot go two hours without checking their messages or answering phone calls. If the call is really important, step outside for a couple minutes to take care of business.

The theater is supposed to be a place to escape reality and fall into worlds that have been envisioned by creative minds, not a place to chat with friends.