By Christian Uriarte, Danielle Navarro on April 20, 2012 in News 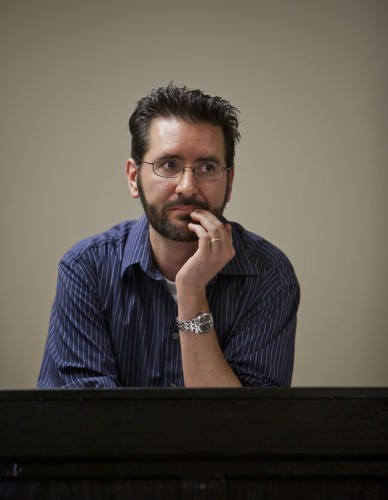 Approximately 30 students and faculty members made up the audience in the President’s Dining Room for Bernard’s presentation, part of the Faculty Lecture Series.

In “Woodland” young siblings named Hans and Gretchen are dealing with the divorce of their parents, a modern-day situation many young people deal with today.

Bernard used the funds he received from his faculty research grant to write the story. He said that it took him about 30 to 40 hours over a span of six or seven months to complete it.

“I spent my time in Running Springs… in Big Bear,” Bernard said. “I wanted to write something specific to the location I was in, and also something to do with fairy tales.”

The original “Hansel and Gretel,” the classic Grimm’s fairly tale, is about two young siblings who are abandoned by their parents deep in the woods.

While lost they meet a cannibalistic old witch living deep in the forest in a house made of candy. The witch plans on eating the two children.

The two children use their wits to escape by outsmarting her.

Bernard not only put a twist on the fairy tale, but he had a different spin on the way he presented his lecture as well.

Instead of the usual PowerPoint presentation sometimes used in other lectures, Bernard spent most of the hour reading his short story to the audience, and then he opened up the floor for questions.

A creative twist on the story was the unique mode of narration. The reader is addressed directly by the narrator.

“Adding that was the last layer,” Bernard said. “The story was too boring without it.”

Bernard said that this type of narration can be very effective when used correctly.

Usually, stories do not address the reader, but allow the audience to see the story from the outside.

“I think it made [the story] more interesting in the sense that it made it more relatable,” said Rebecca Ayala, a sophomore business administration major.

Following Bernard’s reading of “Woodland,” the audience was encouraged to ask.

Some audience members asked about his inspiration. Others praised the story, while a few admitted that they did not realize it was a modern version of “Hansel and Gretel” until people brought it up during the discussion.

“Some of the questions … revealed more things that I hadn’t noticed before,” Ayala said.

This was Bernard’s first time reading “Woodland” to an audience.

“I thought it was a typical Sean Bernard story,” Ayala said. “I’ve had class with him a couple of times, and the first thing that he teaches us about writing style is if you want to write something really good, you have to make it strange.”

“He took a fairy tale that everybody knows and set it in modern times,” sophomore biology major Nathanael Morales said. “It’s something that you don’t see very often.”

Besides being a fiction writer, Bernard also writes literary criticism.

Last year Bernard won a $25,000 grant from the National Endowment for the Arts; he was the only individual recipient in Southern California out of more than 1,000 applicants nationwide.

His former works have been nominated for national awards and have appeared in journals including “Storyglossia,” “Copper Nickel,” “Front Porch,” “West Branch” and “Santa Monica Review.”

In 2010, he was awarded with the Poets and Writers California Writers Exchange Award.

Danielle Navarro can be reached at danielle.navarro@laverne.edu.