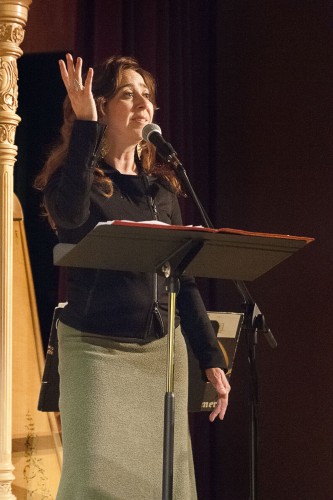 Vanessa Paloma performs a collection of Spanish-Jewish music March 29 in Morgan Auditorium that commemorated the exile of Jews from Spain in 1492. Paloma received a terminal degree for a master of music at Indiana University’s School of Music. / photo by Warren Bessant

Tales of perseverance and celebration about the Sephardic Jewish culture were painted through music by the Los Angeles Jewish Symphony March 29 in Morgan Auditorium.

Uplifting stories of love were chosen to show strength for the Sephardic culture, as this concert coincides with the issuing of the edict of expulsion, the 1492 order by the Kingdom of Spain to expel Jews.

“La Convivencia Musical,” as the title of the concert, describes a musical era of coexistence between Jews, Muslims and Catholics until the expulsion.

All songs preformed were in the Ladino language, which sounds like Spanish with a heavy Hebrew influence, and Arabic accents on certain words.

The music carried the same rich tone as the language.

Operatic voices started the first song of the night with a first-person outlook of a helpless romantic looking to get away with his significant other.

The second song had an archaic rhythm with a soft gospel chant from the choir.

A melodic drone was layered with the higher range of female vocals balanced with the deep rasp of the males.

Although performed in a foreign language, the emotion was clear, a “forgotten feeling.”

The third song started with an uplifting ethnic beat by percussionist Jamie Papish.

The second set of songs included a classical guitar. Its flamenco flair blended with the harp, flute and the singing of Vanessa Paloma in the Ladino language.

The highlight of the night came during the third set of songs, composed by Michelle Green Willner.

The night was also the world premiere of a two-movement piece entitled “A Letter Fell Out of the Sky.” The decision was made to create an original piece of Sephardic music with awareness of the upcoming anniversary of the Edict.

“It’s important that you’re working with material that resonates with you,” conductor Noreen Green said.

Willner and Paloma collaborated to use the Edict and the Ladino language.

“I asked Vanessa to speak very slowly, and had to follow her accents in her voice in order to know where to put the accents,” Willner said.

Once written, it was left for Green to bring to life.

“She’s the composer and I’m the de-composer,” Green said.

The first movement told the story of Queen Isabella and King Ferdinand expelling the Jews and threatening those who did not leave with death. The music was dark.

The second movement of the set was uplifting, rich in bright tones speaking about the blessings of arriving in a new land.

The final set of songs showed the influence of the Sephardic culture in music from different countries such as Turkey, Greece and Bosnia.

A standing ovation from the crowd closed a powerful set filled with culture and tradition from a group of people who could have been forgotten.

“It was pretty unique, but at the same time it had a lot of feeling to it,” senior business major Buddha Gurang said.

On the Calendar
Following the little white rabbit