By Daniel Hargis, Zachary Horton on April 20, 2012 in Baseball, Sports 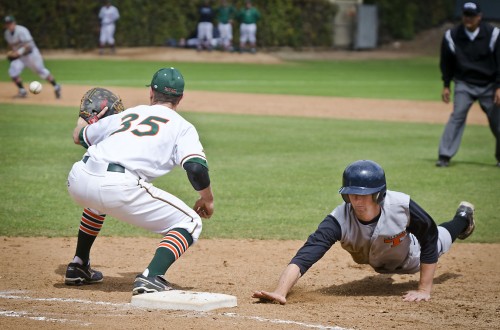 First baseman Michael Stewart receives the pick off throw from pitcher Kevin Knight trying to get the Caltech runner, Albie Lavin, out at first base. Lavin returned safely, but the Leopards chased away the Beavers in eight innings, winning 12-2 at Claremont. / photo by Zachary Horton

Sophomore George Hanna was standing on second base in the bottom of the first inning when senior Jacob Ludvik ensured the Leopard baseball team a lead that would stand against the Caltech Beavers in a 12-2 eight inning mercy rule win.

Ludvik blasted a ball that disappeared into the trees past the left field wall of Claremont-Mudd-Scripps’ Arce Field for his second home run of the season and a 2-0 lead.

“Our goal is to mercy every team we play,” Hanna said. “We have the same mind set no matter who we play, if it’s Caltech, Redlands or Cal Lu. We try to mercy all of them.”

Caltech did lead off with a double on the first pitch of the game by junior third baseman Mason Freedman, which was followed by walk by sophomore second baseman Albie Lavin.

“I was shaky at the beginning,” Knight said. “After the first I got my mechanics back and got into a groove.”

That groove kept Knight on the mound for seven innings, including the first three without giving up a hit or a base runner.

“I thought I did well,” Knight said. “The team needed someone to get into the late innings. I kept the runs low and went into the seventh, so good.”

During that stretch La Verne added four runs to their lead on six hits, but the Beavers hurt themselves with three errors along the way. The Leopards enjoyed a few extended at bats because the Caltech fielders’ would not make catches in foul territory for easy outs.

Each time the Beavers scored a run, in the sixth and eighth innings, La Verne responded with scores of their own.

In the bottom of the sixth junior first baseman Michael Stewart hit a sacrifice fly to center field to score Ludvik, creating a 9-1 lead.

“I always want to put pressure on the strike zone and do too much,” Hanna said. “I try to stay selective.”

In the bottom of the eighth La Verne did not have to earn a hit to earn the win.

Two walks by freshman Jared Hovsepian and Ludvik followed by a wild pitch and another walk by pinch hitter Adrian Franco loaded the bases for the Leopards.

Then the three runs needed to mercy the Beavers came.

A hit batter, Stewart, sandwiched two walks gathered by junior Jason Moralez and senior Ross Hebert, the last of which scoring Franco to end the game.

“Game to game we make an emphasis on how guys execute in their areas,” head coach Scott Winterburn said. “We got our lead off man on and a lot of times he scored. I was very pleased with how we played.”

Leopard junior relief pitcher Christian Grossi filled in for Knight in the last inning and earned one strikeout.

Ludvik led the Leopards with a 4 for 4 outing at the plate including two doubles and a home run, three RBIs and a stolen base.

Ludvik, Cody Hazel and Mason Stoltenberg had three hits in the game.

Monday the team lost 10-8 in Redlands to fall to 23-12 overall and 18-6 in Southern California Intercollegiate Athletic Conference play.

The Leopards gave up six runs in the fourth inning.

Hanna, Moralez, Zach Canfield and Albert Ramos had two RBIs each in the game against Redlands.

The Leopards utilized five different pitchers in the game, but that was not enough to stop Redlands’ senior pitcher Adam Byrd from recording his sixth win of the season.

The Leopards have four games remaining on their schedule.

The Leopards, who still hold a three game lead over Cal Lutheran and Pomona-Pitzer for the top spot in the SCIAC, play at 3 p.m. Friday at Pomona-Pitzer and at 1 p.m. Saturday at Claremont-Mudd-Scripps.