By Christian Orozco, Zachary Horton on April 13, 2012 in Sports 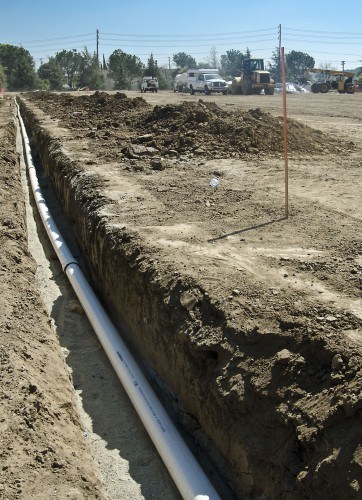 Construction on the football field moves along with the input of the cooling system. Pipes buried beneath the field cool the artificial turf when it gets too hot. On Tuesday, the contractor Byrom-Davey worked to cover the piles of dirt and rock with tarps to protect them from rain and mud. / photo by Zachary Horton

The $4 million project of refurbishing Ortmayer Stadium has been long awaited.

For onlookers now it looks like a huge dirt field – but soon that dirt field will become home to all of La Verne’s field sports.

Ortmayer Stadium has gone through demolition, which began Feb. 6 and is now in the construction phase.

“The field will be used for football, men’s and women’s soccer and hopefully in the future, lacrosse,” said Chip West, senior director of central services and capital planning.

The stadium will have synthetic grass, new lighting, a new scoreboard. And it will be Americans with Disabilities Act compliant.

West and his team have hit some bumps in the road in the project, but they have been able to push through the troubles and quickly find ways to solve the problem.

“When you put together a construction schedule, you always factor in time for the unknown, weather issues and hidden challenges,” West said.

During construction workers found an asbestos pipe that lay underneath the football field.

“There was knowledge ahead of the construction start of the pipe, but what we didn’t know was the size and exact location,” West said.

“I have been doing construction here on campus now for four years and you’d be surprised how many times we go to dig up the ground and find something we didn’t expect,” West said.

Although the 120-foot pipe has added extra work for West and his team, the Aug. 1 target date for completion has stayed the same.

“Each budget has a contingency, wiggle room for unknowns, so we were able to absorb it into the existing budget,” West said.

The refurbishment also brings something new to the University of La Verne – synthetic grass.

The synthetic grass on the field means much less water usage, so it will be more economical for the University of La Verne.

The synthetic grass will also allow the field to last longer with all the sports that it will be equipped for.

“As a football coach I’d prefer real grass,” head football coach Chris Krich said. “But in our case turf was needed because this field is going to be used all the time.”

Krich is willing to be the team player the school needs and recognizes the benefits of synthetic grass.

“You couldn’t use the field year round if it was grass,” Krich said. “It decreases injury and requires less maintenance. It was a no brainer.”

Krich and his staff are excited to start the new season with a new home.

Krich and his team also look to take pride in their new $4 million home.

“It brings in a psychological aspect,” Krich said. “This is ours, this is our new home.”

Before the construction began for Ortmayer Stadium, head track and field coach Pat Widolff had some concerns about the track and did not feel the school was taking the right steps in the refurbishment.

Months have passed since then and Widolff’s concerns have been addressed.

“We are very excited for next year,” Widolff said. “We are expected to host great meets, along with tracking great schools and competition. It will also be beneficial for practices and improving our athletes, especially the all-American contenders.”

The University of La Verne has not hosted a home track meet in last four years.

Hopefully with the new design of the track the Leopards will finally be able to compete at home in front of their fans.

Aside from the asbestos pipe, everything seems to be going well for the University of La Verne and the refurbishment of Ortmayer Stadium.

By next fall, the home should be completed.

“I want our teams to actually feel like they have home field advantage,” West said.

Leopards dethrone the Kingsmen in sweep
Strings come together in harmony