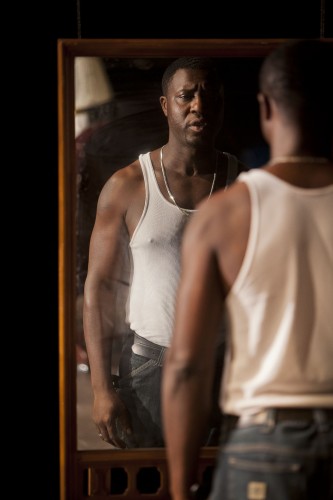 ULV alumnus LaVelle Wilson goes through rehearsal for his first one-man show. “The Agony of Colin Powell” is the final performance of Ralph Saldana’s senior directing thesis. William Cook, professor of English, wrote the fictional dramatic monologue dealing with the internal struggle of the former Secretary of State. / photo by Christian Uriarte

A powerful position can have its pitfalls, which Colin Powell learned as the first African American to serve as the United States Secretary of State serving under President George W. Bush.

Powell is best known for his role in strategizing for the 2003 invasion of Iraq. Powell’s approach for the invasion was to impose the policy of containment to control the Iraqi regime. Instead Bush pushed his war agenda and Powell was compelled to support the president.

This was the story told in the play “The Agony of Colin Powell,” starring Lavelle Wilson, Friday and Saturday in Dailey Theatre.

The play was written by William Cook, professor of English, and was directed by Ralph Saldana, senior theater major, as his senior thesis.

Wilson gave a performance as Colin Powell that was reminiscent of a Greek tragedy. In the hour-long monologue, he executed his lines theatrically and left the audience in awe.

“It was magnificent,” Kent Badger, professor of health services management, said. “He translated the essence into a poetic presentation; that is what made it so powerful.”

Throughout the play Wilson reenacted the feelings that Cook imagined Powell felt during the time when President Aristide was being removed from Haiti in 2004.

There was a lot of conflict within Powell that was oppressed because of his position as Secretary of State. He was forced to make decisions that he did not agree with and that made him resent the others in office.

At one point in the play Wilson showed individual pictures of Dick Cheney, Paul Wolfowitz, Donald Rumsfeld, Karl Rove and George W. Bush. When each picture was shown he performed a rant about their actions at the time and how he felt toward them.

“I thought having these images of who he was talking about conveyed different depictions of those politicians through theater and creates a stronger impact,” Sawsan Malla Hussein, graduate student, said.

This play unraveled a lot of the feelings Powell had and the truths behind the decisions that were made by the administration. Cook did a great job of exposing all these issues to the audience that they may have not already known.

“I had always found Colin Powell fascinating,” Alex Yamada, sophomore psychology major, said. “Out of the Bush (administration) he was always the one to have a logical view”

“He was the only one to admit there was mistakes on his behalf and the administration, and I respect him for that,” Yamada said.

The quality of this performance was so powerful that it may benefit more students if it is shown to the political science classes. This was the thought of a few audience members as well as Cook.

Many students may not know who Powell is and by watching this monologue they would have a better understanding of who he is.

“I really believe in the power of theater,” Malla Hussein said. “Especially when its mission is to raise awareness on topics such as social justice.”

Cook presented this script to Saldana during his freshman year. It was not until six months ago that Saldana chose to take this on as his senior thesis

“Everything was in line, I work in politics outside of school and it was good to bring it all together,” Saldana said.

Wilson’s performance was outstanding and there was no lack of enthusiasm from the audience. He took this performance and although changing some of the content still made it his own and portrayed the vision that Cook had for his play.

“I am a rebel,” Wilson said. “Whatever the script says I do the opposite.”

Overall, the performance was amazing and very well executed. The amount of time and effort Wilson put into this performance really made him shine

“I couldn’t have had anyone else do this but Lavelle,” Saldana said.

Veronica Sepulveda can be contacted at veronica.sepulveda@laverne.edu.