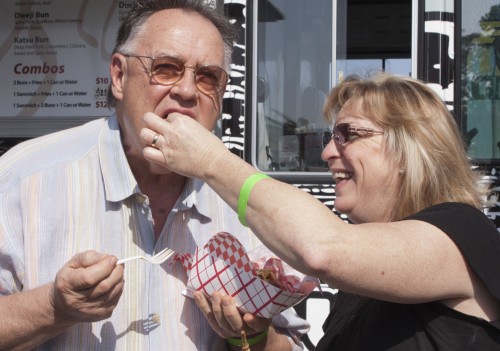 Susan and Scot Howard enjoyed a zucchini tornado from the My Tornado Potato food truck at Damien High School’s Food Truck Festival on Sunday. The event featured 20 trucks with many different types of food as well as live music, such as Mad-n-Mack from Alta Loma. Damien held the festival to raise money for their athletic facility and hopes to make it an annual event. / photo by Cassandra Egan

With eyes widened, an individual walked closer towards temptation, enchanted by the smell and determined to request an order and thank the chef for his fresh shrimp tempura.

This is one of several sensations people experienced on Sunday at Damien High School’s first Food Truck Festival, which turned the school’s parking lot into a food utopia inhabited by 20 of Southern Cali­fornia’s most well-known food trucks.

Damien hired Phil Escamilla, a local promoter, to create a fundraiser to raise money for their athletic facility.

“They wanted this to be unique, so I thought what better way than to gather gourmet food that everyone will enjoy,” Escamilla said.

To help Damien’s fundraising efforts guests were charged a $5 festival entry fee, but children age 5 and under were free.

After entering the gate, visitors were submerged in a pool of hungry customers who were determining which food truck would best satisfy their appetite.

While looking at their selections, from Jogasaki Sushi Burrito to Tornado Potato, customers were entertained with the DJ playing music.

Jennifer Nole, a mother of one from Claremont, said she saw this event being advertised on Twitter and thought it would be a good family trip.

“This event was not that far from our house so I thought, ‘we have to come down,’” Nole said. “This is a clever way to help out the school.”

Nole shared an order of the sausage tornado with her son. She said it was clever of how they twirled the potato around the sausage.

Every food truck held its own identity, including Rebel Bite’s signature item, the Karl B. Marx grilled cheese sandwich.

The crunch from the first bite of this comfort food had people savoring every minute and left them wanting more.

Whether a food fan was tasting the grilled onions and marinated beef or watching cheddar cheese melt onto their fries, one thought came to mind: this must be heaven.

The festival also had cupcake, waffle and cookie food trucks to satisfy a customer’s sweet tooth.

Lee Grammer, a baker from Suite 106 Cupcakery, admired how people enjoyed their treats, including the bakery’s best-selling pumpkin-n-bacon cupcake.

With its rich frosting and bacon sprinkled on top, the taste of sweet pumpkin with a pinch of salty delight had customer wanting seconds – or thirds.

“People in nature are foodies,” Grammer said. “They love it when food trucks come and provide fresh, gourmet ingredients.”

Grammer was also surprised at the number of people who came to the event, but said she had a feeling the variety of food trucks were what made it successful.

As customers enjoyed their meals in the courtyard, they were entertained by live performances.

Every performance, whether it was the Spartan Spirit Squad or vocal duo Mad-n-Mack, had the audience cheering.

Mackenzie Paige, singer for Mad-n-Mack, thought it would be great if this event were more recognized within the community.

“It was a good feeling helping out the school while having fans cheer for us,” Paige said.

Given the large turnout, Susan Francis, a Spanish teacher at Damien, believes the school will host another food truck festival next year.

“This was a great idea,” Francis said. “Everyone seemed to have a good time and it was very unique.”

Alex Forbess can be reached at alex.forbess@laverne.edu.