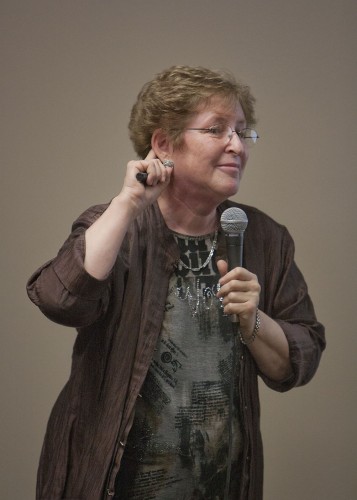 Valerie Jordan presents a lecture explaining how states differ on various mental health issues and state-specific licensing exams for psychologists. Jordan, professor of psychology, titled her lecture “State-by-State Variation in Mental Health Regulations.” It was part of the Faculty Lecture series on Monday in the President’s Dining Room. / photo by Brittney Slater-Shew

Valerie Jordan, professor of psychology presented a summary of some of her research on the ambiguity and missing information between states about mental health services on Monday at the President’s Dinning Room as part of the faculty lecture series.

Inspired by a student from out of the state, Jordan began researching if states outside of California have the same regulations for practicing psychology and if mental health information websites are user-friendly.

Jordan and doctoral students researched the difference in the legal age of consent, how long can a patient be held for against their will, when a psychologist should break the confidentiality agreement and how many hurdles one must go through to practice in different states.

Jordan found that those issues vary between states. It is important for students who move geographically to know the policies.

“Students should not make the assumption, like I’ve made for many years that they are the same, because they’re not.” Jordan said.

Each state has a licensing board that sets regulations for mental health issues and follow some national recommendations from organizations such as the American Psychological Association.

“I know states have different laws because they have different needs, but it seems that mental health is kind of a no-brainer,” psychology major Beth Janetzke said.

The age of consent for minors to receive outpatient mental health treatment changed in California from 14 to 12 in 2011.

“I don’t even know how that happened.” Jordan said. “The state psychological association was not involved as far as I know.”

Age of consent and holding a patient against their own will are written into State statutes making the language hard to understand.

A consumer issue Jordan looked into was the duty to warn positional victims.

Due to the 1974 case Tarasoff v. Regents of the University of California, mental health professionals have a “duty to protect” individuals who get threatened by a patient, and must break confidentiality

Many states have a mandatory duty to warn, some states have no regulations and some have permission but are not mandated.

Jordan found that there is very little portability for a degree between states.

Surprisingly, only about half of the states had mental health information on their website, the remaining states had information from non-psychology websites.

Updating the websites to provide the proper information comes down to money, Jordan said.

“Something has to be done, but who do you write to,” biology major Nathanael Morales said.

Writing letters to the governor’s office alongside state professional organizations to advocate change, unfortunately, is a constant uphill process.

“It’s all part of knowing what the pathway of the road is in becoming a psychologist, it’s good to know it from the beginning,” Jordan said.