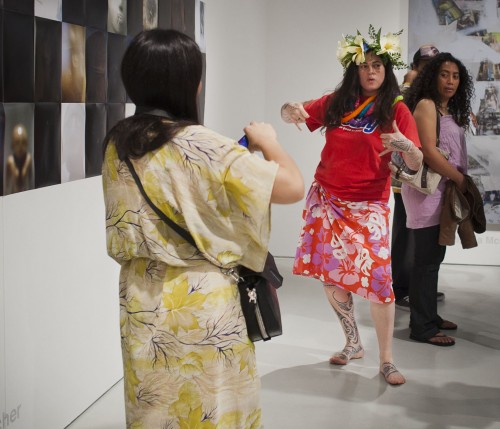 Rosanna Raymond poses for a picture taken by her friend Chantal Fraser on Saturday in the Harris Gallery. Both women are featured artists in “ATA: An Exhibition of Contemporary Samoan Art,” which focuses on the present by taking the essence of Samoan culture and incorporating it into a contemporary dialogue. / photo by Christian Uriarte

Artists of the Pacific Islands gathered in LaFetra Hall to present their work as part of the opening day for the Contemporary Samoan Art Exhibition.

The all-day event included films, poetry, visual performing arts and a discussion panel before opening the Harris Gallery exhibition to the public.

“I was trying to put it together because, in a sense, I was so alone,” art studio manager Chuck Feesago said. “There are very few artists out there, let alone Samoan.”

Feesago said he was able to connect with Pacific Island artists through Facebook and wanted to connect as much as he could to build a sense of community.

“It was very inspiring knowing there are people out there,” Feesago said.

The artists were interested in exhibiting their work in response to American misperceptions of Oceania in tiki kitsch caused by tourism.

The film follows Kate, played by artist Daniel Satele, as a married woman in New Zealand who becomes disheveled by the suicide of iconic actress Rebecca.

Years later, Kate is still so affected by the celebrity’s death that she has now become an alcoholic, compulsive masturbator and unemployed mess.

Encouraged by the wisdom of her television set, Kate sets off on a journey of self-improvement and pursues the mystery of Rebecca’s supposed death.

The film tells the story of Joey, a youth at the Hawaii Youth Correctional Facility.

Joey is hoping to leave the gang his brother forced him into and make it to college.

“Born Fo Bang” was filmed at the Hawaii Youth Correctional Facility and each role was played by the respective teenagers incarcerated there.

“I thought the film was the most relatable and emotional,” UC Riverside student Jazmin Castro said.

U.S. Samoan actor-playwright Napoleon Tavale performed his one-person work “Inoa Fanau (Birth of a Name),” based on the story behind his name.

After singing the national anthem for Samoa, Tavale demanded the attention of his audience through his dramatic acting in the story of abuse.

Associate professor of psychology Felicia Beardsley was moderator of a discussion panel of eight artists.

“For the first time, we’re all actually going to have a conversation,” Feesago said.

The artists shared their motivations behind their art pieces.

“Through the arts, it brought me back to where I came from,” filmmaker Sila Agavale said. “At a young age in Samoa we all start with performance arts from religion.”

“Growing up, my dad would tell us all these stories,” performer Rosanna Raymond said. “So I think it has a huge influence on the films I do today.”

The artists discussed Samoan tradition and how it has been modernized.

“There’s a huge influence from Hollywood,” Tavale said. “They have a bigger platform than Samoan culture.”

Feesago agreed and said that stereotypical symbols and motifs of Samoan culture have led to culture being commoditized.

“I struggle constantly with the frameworks for what we’ve been taught,” storyteller Amelia Niumeitolu said. “We have our own vernacular, own abstracts, own vocabulary.”

“I can only speak for myself and the stories I tell,” Raymond said. “I have to be true to myself, and that is being a Pacific Islander. And it is a struggle, but also a blessing.”

The exhibition of art showcases the emerging artists of the Pacific Islands, and will be on display until May 24.