By Annunciata Williams, Debora Escobar on May 11, 2012 in News 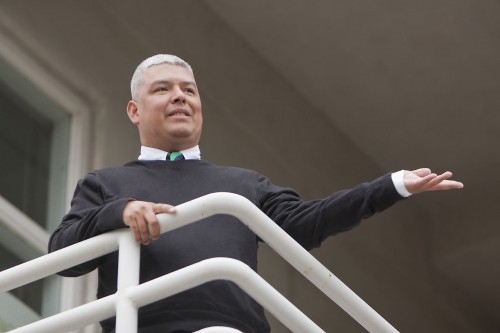 Robert Ruiz, director of forensics for the Speech Communication Department, is preparing for the National Parliamentary Debate Association’s National Championship Tournament, to be hosted by the University of La Verne next year. During his undergraduate career, Ruiz served as captain of the debate team for two years and won the U.S. National Championships in 2007. Ruiz earned both his bachelors and masters from the University of La Verne. He is currently pursuing a second master’s degree in social sciences. / photo by Debora Escobar

Rob Ruiz, director of forensics for the speech communication department, is a veteran debater.

As a ULV student, he was a member of the debate team, and served as debate team captain for two years, winning the U.S. National Championship in 2007.

Today he teaches public speaking, debate and argumentation, and political communication in addition to coaching the University’s debate team, which is currently ranked sixth best in the nation and 28th in the world.

In a recent interview, Ruiz talked about the team winning the bid to host the 2013 National Parliamentary Debate Associa­tion’s National Championship.

When did you hear the news that La Verne would be hosting the nationals?

The Nationals for 2011 was the weekend of April 12 so we put the bid in on Saturday night at the coach’s dinner. That’s where all the delegates for the universities showed up, so we showed up and put the bid out and they voted right away.

Was it difficult to get funding and approval from the University?

Actually no, the first person I went to was (Dean of the College of Arts and Sciences) Jonathan Reed, and right away he gave 100 percent support.

Then I had to meet with President Lieberman and (Provost) Greg Dewey.

They were behind it 100 percent by the end of that meeting. So that was my first big task and it was great news and then we knew we would get the debate community because you know debate loves the University of La Verne.

What did La Verne need to qualify for this?

Well you have to make sure you could at least have around 140 teams come onto the campus. You have to have a budget to confirm that you’ll be taking care of some things as far as registration goes.

Other universities bid as well.

Since we bid, the other universities decided not to bid, because everybody wanted to come to La Verne.

We are known for being one of the top debate universities in the U.S., and no one’s ever visited us.

They’ve been to Claremont for a tournament but they’ve never come to La Verne. With (Speech Communications Department Chairman) Ian Lising being the chair of the World Council for seven years, internationally we are very well known.

We’ve made finals, won the national championship and always had one of the best teams.

People wanted to come to La Verne, this university that they have only heard about and seen win competitions.

Has La Verne ever bid for this before?

Never. It has become a big deal to host nationals as opposed to even wining it, even though we have won it already.

Hosting it has become a huge bid process yearly now. You hear around the debate circuit rumors of who is going to put in the bid for next year.

This year going against us was to be Cornell and Texas State, but they knew they wouldn’t win.

The only schools that have hosted nationals have been the University of Vermont, Claremont, Portland State and Wellandis.

What was your reaction when you heard?

I was relieved because there was much pressure.

I mean we took 32 students to this competition and that is unheard of, I think Cornell had 20, so we had judges in the majority of the rooms. We were very well represented.

How did the team members react to the news?

They were excited. They could not go to the delegates’ meeting; it was just myself, (adjunct professor) John Patrick, my coach, and then Ava Jahanvash, our ASULV president for next year.

They were in the hotel waiting for the text from us saying whether we got it or not.

When we finally got back to the hotel, they were all there having a good time; we all went out to dinner to celebrate, so the team was very excited.

Are you concerned about your team at all?

Yes and no. I’m concerned because it puts a lot of pressure on them, because we are the host school and they would love to win their own hosted tournament.

We have 51 universities, probably around 500 to 700 students being housed at the Sheraton Hotel.

They will have so many rooms open since the students will be back in the La Verne dorms.

We cap the teams at four teams per university and usually it doesn’t fill to 160 teams. After that we are allowing universities to add more teams.

I decided to keep my cap at four; so only four teams from La Verne will enter as opposed to maybe six. So the pressure will be on the students to compete for those four spots.

The rest of the team is so excited about hosting it many of them just want to spend that weekend helping out. Hosting the other universities and help run the tournament.

How did the University react when you shared the news?

I emailed president Lieberman right away Saturday night when I got back to the hotel and I had the Internet access. She was very very excited.

She responded I think that night. It was like eleven o clock at night I emailed her and Jonathan Reed. They were very pleased.

In fact Chip West right away emailed a congratulations, Admissions, advancement, everyone has been giving their congratulations to us and they’re very excited.

Especially after seeing the poetry slam, all these students all over campus saw how amazing an event it was. Now everyone’s excited for all these students from universities everywhere seeing our campus finally, seeing how beautiful it is.

How is the preparation going and how are you preparing for them?

I can honestly say it’s something I think about every day.

It has been one year in the making as far as the bid. Now that we have the bid, it’s pretty much going to be weekly meetings.

I already have the contract for the Sheraton that I have to send back and tell them to fix. It’s going to be a lot of work.

I have a great group of individuals who are in my main panel of advisers: Ian Lising, John as my championship director, I have Aaron Zamora my chief of staff and I have alumni to help out with the money.

Have you had any problems trying to prepare the team or trying to get ready for the tournament?

Not yet. My biggest obstacle is going to be funding.

Usually that is not an issue with national championships because universities really don’t provide much.

We are spending enormous amount of money on this and it is the money part that is going to be the biggest issue for me. I want to make sure they remember this nationals more than any nationals out there, that’s just how we do things.

We went to the city council already and spoke to them and they’re going to see what they can do for us. We already have the support of the city of La Verne.

If the sponsors can come in pretty strong, it’s going to be one heck of an event.

What does hosting the nationals mean for La Verne?

To La Verne debate students it means the world.

It means everything to us because again we were recognized as a big debate school but hosting it will just solidify how much support we have from this school.

A lot of universities don’t have the support we do, they have their own club, they are responsible for their own funding and things like that.

As far as the university I think it’s a big deal. I think we have 500 to 700 students on campus seeing the University, seeing how great we are, and our new additions.

I think it’s a really big event for the University, I would hope so.

Does hosting the nationals mean that the University is going to find housing for all the visiting students?

We have hooked up with the Sheraton, and it is basically the tournament hotel as they call it.

Other National events that have hosted nationals. They put on their website recommendations for local hotels, but I wanted to make it similar to worlds, to where it is one hotel to where we can transport people back and forth.

So we have 51 universities, probably around 500-700 students being housed at Sheraton. We’ve been talking to the Sheraton for a good probably two years now. They’re going have so many rooms open, the students will be out and back in these dorms, our new dorms.

So who’s going to be coming, do you have any idea of what schools will be coming?

As far as nationally, you have schools such as Harvard, Yale, Cornell, Saint Johns, Stanford, Vermont, Texas State, Willamette, Portland, of course the locals, USC, UCLA, Loyola Marymount, Claremont, and then international schools. We’ll find out for sure in December.

When they find this out, you are going to have a lot of international schools such as Oxford, and Cambridge and London School of Economics who are very close to La Verne because of the international circuit.

They are going to be willing to send one to two teams to compete at this tournament.

What are you hoping the students of La Verne get out of seeing nationals?

The one thing I also want to get out of that weekend is for the La Verne students to come out of the dorms and meet the students and see the culture of debate.

I think there is this stigma of debate that it is just a bunch of smart nerdy kids who sit in a room and argue about politics, the environment and social ideas.

I want them to see the culture. How interesting and cool it is to see students who are just having fun, they are laughing.

Then when it comes down to debating how articulate and smart that they can be they and still have a really good time. I know there are tons of students at ULV who have the potential to be national champions or world champions who I just haven’t reached out to yet, maybe I haven’t instructed them yet.

I want them to come out and see it and see how cool this culture is and be a part of it. It would be nice.

That’s another big thing, besides the local high schools and getting those kids, I care about the La Verne students who could be possible champions one day.