By Allison Lavelle, Debora Escobar on May 4, 2012 in Greek Life, LV Life 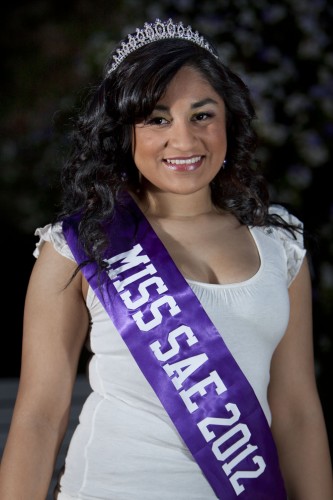 Miss SAE Pageant winner Lorena Sandoval is currently a cheer coach for the El Monte Young Champions and aspires to be a family lawyer. For the talent portion of the competition Sandoval wrote and performed a cheer about Sigma Alpha Epsilon. She has been a member of Alpha Omicron Pi since fall 2009. / photo by Debora Escobar

The pageant raised $1440 which was split between the Children’s Miracle Network, SAE’s charity, and the Arthritis Foundation, AOII’s charity.

Pageant participants could also raise points towards their score from audience members buying merchandise or making donations in their name.

“(The pageant) really promotes the modern woman and being able to go out and act professional and graceful,” Kevin Brousard, philanthropy chair for SAE, said.