By Campus Times Editorial Board, Jason D. Cox on May 11, 2012 in Editorials, Opinions 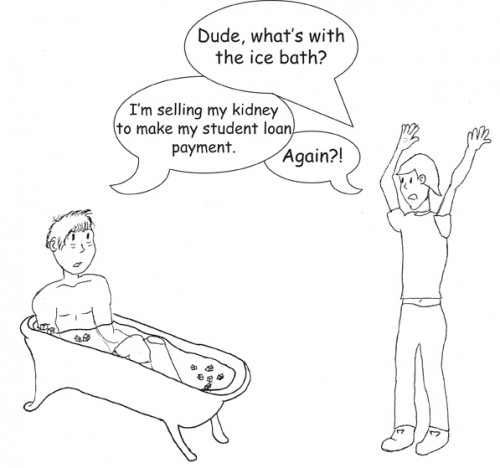 Republicans in the Senate blocked the Democrats’ bill Tuesday that would prevent the interest rates of the Stafford Loan from doubling July 1.

The interest rate that is currently 3.4 percent would double to 6.8 percent, a price that only adds to the thicket of debt students are fighting.

Stafford Loans are federal education loans that were borrowed by about 7.4 billion undergraduate students last year.

In 2007 Congress cut the interest rate from 6.8 percent to 3.4 percent in hopes that the move would help students and the economy; however, little has changed in financial and student hardships since this time.

An article in the New York Times states that American students took out twice as much in student loans in 2011 than they did a decade before, this number being $112 billion.

It went on to say that Americans owe $1 trillion in student loans – a 25 percent increase in just the past decade and one which surpasses the total amount of the nation’s credit card and auto loan debts.

Mark Kantrowitz, publisher of FinAid.org, said in an interview on NPR that the average one year loan costs a student about $3,300.

At graduation the amount has reached $9,000 where students will also pay an additional $670 over a 10 year repayment plan.

If the Stafford Loan interest rate was to double the additional amount paid would be $1,800.

What is even more baffling than the amount of debt students are accumulating is the daunting task of paying it all back.

The education students are receiving that is meant to lift them up is being kept down by the shackles of debt.

For many students the entire point of going to college is to earn a higher-paying job but these plans of moving up the financial ladder is becoming virtually impossible with the amount of debt they are facing.

Ideally students would graduate and find an occupation that pays enough for their debts to be repaid but a lack of jobs is also making this difficult.

In a statement last week, the White House said, “As the economy continues to recover, and at a time when the market interest rates are at historic lows, students who rely on loans to finance postsecondary education should not be burdened with additional college debt.”

This country can hardly preach about the importance of education if its citizens are unable to afford it.

It is understood that all aspects of society are feeling the pain of an empty pocket but education is continuously being fronted with these impediments.

Students are facing a future where they will have to solve many obstacles that have been placed by previous generations, and adding on the encumbrance of loan debt is only adding to the mess.

Students should not have to regret their decision to pursue higher education because of the horrific costs. They should be able to chase down knowledge and in turn share that for the benefit of society.

However, the abstract fear of a tangible ghost may instead haunt them.

Commentary: Stop it with the festivals
Faculty, staff honored for service and tenure