By Brittney Slater-Shew, Christian Orozco on May 18, 2012 in Sports, Track & Field 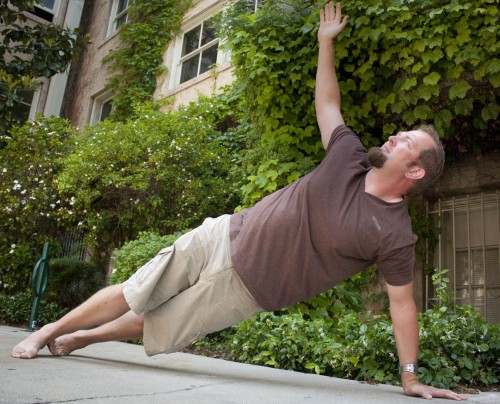 After bouncing around among several schools, it became apparent to 35-year-old Sean Smith that La Verne, with its small class sizes, was the place for him. Smith, who graduated in 1999 and got his MBA in 2001, returned this semester to compete in track and field. / photo by Brittney Slater-Shew

University of La Verne graduate Sean Smith has shown Leopard fans that age is nothing but a number, and has competed with some of the best shot put and discus throwers in the Southern California Inter­collegiate Athletic Confer­ence this track and field season.

The 35-year-old student has been participating since March 16 of this year.

“It’s been an absolute pleasure to have Sean come out and compete with us,” head track and field coach Pat Widolff said.

Smith began his throwing career at Chaffey High School, which he attended from 1991-1994 – the years many of his competitors and teammates were born.

“It was great throwing with him,” sophomore Alfonso Moreno said. “When I go to the record boards he’s up there and getting to throw with him was an awesome experience.”

“I came in contact with Pat about a year ago,” Smith said.

Smith told Widolff that they had a good chance of taking SCIAC with the talented line-up Widolff had, but he was lacking throwers. Smith expressed to Widolff if he could come back and help he would. That is when Widolff told Smith that he thinks he still does have some eligibility.

Smith then immediately sent in his transcripts to the NCAA administrator and they told him that he could not compete.

Smith credits two things that have allowed to him to perform at his best this season. One is pilates. The workout has allowed him to strengthen his core.

“I’ve been doing it religiously for the last three months,” Smith said. “I never really focused on my core before pilates.”

The second thing that has helped Smith was not worrying about the pressure.

“A lot of the young guys step up and let the pressure get to them,” Smith said. “But this isn’t pressure to me, this is fun. Pressure to me is running my own business and putting food on the table.”

Smith currently runs his own consulting company working with banks and credit unions in Carlsbad and also teaches business classes part-time at Mira Costa College in nearby Oceanside.

Smith lives in Carlsbad and also is an assistant throwing coach at Cal State San Marcos.

In Smith’s free time he likes to beach bum it with his girlfriend and his dogs.

At the SCIAC Champion­ships Smith placed fifth in both the shot put and the discus throw. In 1998 and 1999 Smith placed second in both of those events.

As for his teammates, they have greeted him with open arms.

“It was really weird coming back at first,” Smith said. “I didn’t want them to think I was coming back trying to take the spotlight.”

Smith said that at the first meet he almost felt like he was from a different team.

“I knew that they didn’t care though,” Smith said.

Smith ended up creating a strong bond with his fellow throwers.

“After I got over it and I realized they didn’t care and they became my friends I was able to focus on my throwing,” Smith said.

Smith will leave the track and field team for the second time and what he has accomplished was beyond anyone’s expectations.

“It felt good to compete at a higher level,” Smith said. “And to beat younger guys, that was a victory for me.”