By Annunciata Williams, Christian Uriarte on May 18, 2012 in LV Life 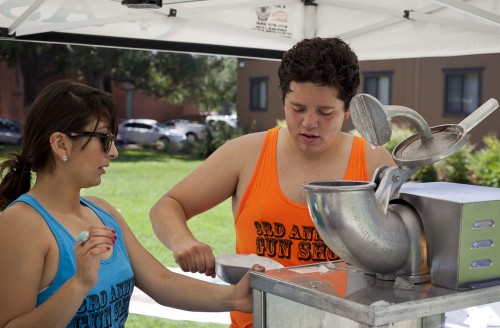 Cindy Vallejo, junior communications major, and Spencer Contreras, junior business administration major, prepare free snow cones for students at the University of La Verne’s third annual Soakfest on May 10 at the University Mall. In addition to giving out free french fries, snow cones and tank tops, the event also had a DJ and a variety of water activities. / photo by Christian Uriarte

The foamy bubbles swept across the lawn as the wind picked up, landing in trees, booths and hair, inciting contagious laughter throughout the day.

“It’s cool cause its like a slip-n-slide, too,” sophomore sociology major Charlene Haskin said.

Haskin was standing in the bubble pit, covered from head to toe with foaming bubbles. The large blue bubble playpen allowed students to play in a sea of bubbles.

Right next to the bubble playpen sat the soak zone, an even larger blue maze equipped with multiple long range water guns and where several CAB members were engaged in a water fight.

There was more than just water works, though. A disc jockey played popular music loud enough to be heard across campus and free raffle tickets were available to be filled out.

The Fresh Fries food truck was on hand and as the minutes went by, the line for fries grew longer and longer.

Nicole Kezos, a senior psychology major, said if she lived closer to campus she would get her bathing suit and join in the bubble pit.

Six flavors of snow cones were also being offered to students to help them cool off at Soakfest, which was a welcome mid-afternoon treat.

CAB’s special events and philanthropy chairs collaborated to provide potted plants that students could give to their mothers in honor of Mother’s Day.

Shelby Griffin, CAB’s philanthropy chair, said that they wanted to combine Soakfest with a special event for Mother’s Day.

Griffin, a sophomore history major, provided seeds and plants along with small pots.

Students filled the small pots with soil and either a seed or a partially grown flower.