By Ingrid Rodriguez, Katherine Careaga on May 11, 2012 in News 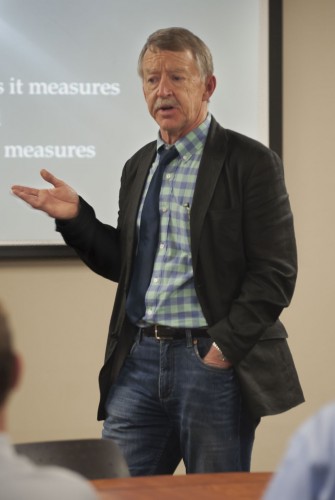 David Werner, associate professor of English, spoke on “Lessons from Prison” Monday in the President’s Dining Room. Werner talked about how prisoners, when released, are very likely to return to prison. Werner’s presentation was hosted as part of the weekly faculty lecture series. / photo by Katherine Careaga

David Werner, associate professor of English, said he learned everything he knows about teaching from prison.

He elaborated on this in his lecture titled “Lessons from Prison” which focused on why inmates should be educated – so they won’t return to prison after they are released.

“There are more people incarcerated 40 miles from here than any place in the world,” Werner said.

According to the state prison system’s own numbers, 70 percent of the state’s inmates end up back in prison.

That doesn’t even account for those who end up in prison in another state.

Providing inmates with an education is the best defense against recidivism, Werner said.

His experience teaching in prisons has given him insight and empathy.

The stories he has heard from inmates, Werner told his audience, “would curl their hair.”

“In some sense (being in prison) gives students permission to do things or say thing they would normally not say,” Werner said.

He said he found so many of their stories and where they were coming from in stark contrast to his own background.

“If I had lived the kind of lives my students have lived,” Werner said. “I would’ve ended up exactly where they did.”

Werner said that his role is to teach and give information, but in the end it is their decision whether or not to apply what they have learned.

Werner said that generational incarceration is also something he sees frequently.

This means if a father was incarcerated then his son is more likely to go to prison.

“If you were raised in a bad background, you don’t have a chance,” freshman theater and creative writing major Hayley Gripp, said.

Werner said he worked with 15 to 20 people from UCLA, USC and other Cal States and private universities to design an education system for the Los Angeles County Jail System.

Werner believes that if you educate people, they are much less likely to return to prison.

“I found it quite interesting and at the same time scary that there were more prisons within 40 miles from us,” Gripp said.

He said a prison crisis hit and the Los Angeles County Jail System did not have any money.

They fired their only education system and replaced it with volunteers who taught the inmates to balance their checkbooks and gave them life lessons.