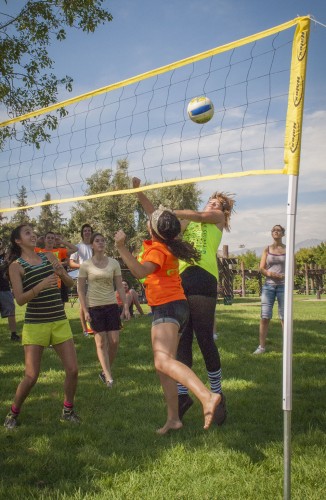 Elizabeth Loera, Marisol Martinez, Brittany Martinez, Jessica Loomer and Sarah Mayo play on a team together in the Iota Delta Sorority 1980s volleyball tournament Saturday at Las Flores Park. The objective was to raise money for their Kimberly Tuers Iota Delta scholarship. Students could create a team to compete in the tournament for $2 a player. / photo by Kelley Maggiulli

Saturday, the women of the Iota Delta Sorority filled a portion of Las Flores Park in a sea of neon colors by hosting a 1980s themed volleyball fundraiser.

“I got the idea from my cousin and some of his friends and since our sorority was founded in the ’80s, we just thought it would be a fun and original idea,” Christina Hernan­dez, senior history major and organizer of the event said.

“All we want is for people to come out and have fun, as long as that happens we know we were successful.”

A steady flow of people showed up throughout the event and there was a constant game of volleyball being played by members of the sorority and those in attendance.

Teams were made up of guests and mixed with member of the organization.

Substitutions were permitted for all who wanted to join in to the game but arrived late.

Those who could not or did not want to join in on the game, enjoyed the company of friends and other members on picnic tables nearby.

Just because it was a fundraising event does not set it free of competition for some of the girls in the sorority.

“Some of these girls are pretty intense but it just makes the game that much more fun,” Lexus Miata, freshman English major said.

Money was being raised by the sale of burgers, hotdogs chips and other refreshments.

The money that was raised will go into the Kimberly Tuers Iota Delta Scholarship.

The scholarship is given to a member of the sorority who has shown exemplary scholastic and leadership skills.

Iota Delta was able to raise $100 from the event.

“It is nice to get out of my usual environment and step into something that is completely different,” Kelly Anne Cisneros, San Dimas resident said.

“We are having fun even though we can’t play,” freshman Kayleigh Casas said.

Casas was unable to join the volleyball matches due to an injury but was came to support the cause.

“I heard about the event through friends and thought it would be fun,” Casas said.

Sorority members were not the only ones dressed in theme.

Most of the people in attendance wore neon colors making the group of people hard to miss.

“I really enjoyed myself and liked getting to know the girls in the sorority,” Miata said.

Iota Delta will be holding their annual Bowl for Breath the second week of November.

They encourage all to come out and support, it will be a week-long event raising money and awareness for Cystic Fibrosis.