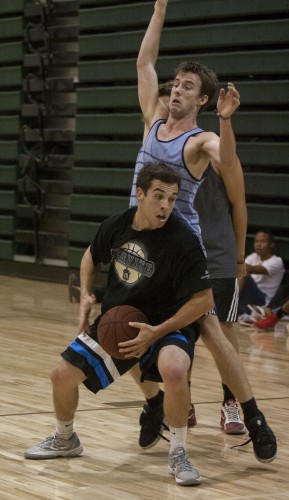 Michael Stewart of the Sigma Alpha Epsilon team defends the basket against Jake Vieth of the Phi Delta Theta team on the third night of intramural basketball Monday. Vieth made the shot. Phi Delta Theta won this game and, ultimately, the tournament. / photo by Jessica Harsen

“We really just want students to leave their rooms and take part in something fun instead of just sitting in their rooms and watch television,” Carina Hernandez, senior criminology major and CAB chairwoman, said.

“There are usually six to 10 people in a team and our only rule is that there must be at least one girl, but most teams have at least two,” Hernandez said.

The sound of sneakers squeaking on the hardwood floors and dozens of cheering fans echoed through the Athletics Pavilion halls on the first night of intramurals.

Eight teams started off the competition only to have two of them battle it out in the finals a week later.

They were each given 20 minutes per game with a five-minute break in between.

“We let them call their own fouls,” Hernandez said.

“We are basically here to keep score and make sure it is a clean game, so far everyone is respectful of one another,” she said.

By the last night the crowds shrunk and the echoes subsided to a subtle whisper, but that did not stop the existing crowds from cheering any less.

“We come early and practice before the game,” Breana White, junior English major and member of the semi-finalist Monstarz team, said.

“We tried to play off of each other’s strengths and with a lot of passion,” she said.

After a long and challenging two weeks, intramural basketball finalists Phi Delta Theta and Sigma Alpha Epsilon stepped back on the court to finalize the championship.

“I feel confident going into the finals,” Eric Dorado, a junior movement and sports science major on the Phi Delta Theta team, said.

Dorado, along with his teammates, worked on strategy and technique to improve their chances of winning the championship.

“We prepared and did various workouts on passing and shooting,” he said.

Although both finalist teams prepared and beat out four other teams to get to where they were, only one of them would walk out with the title of intramural basketball champions, bragging rights and a free t-shirt provided by CAB.

With the final score of 12-11 in favor of Phi Delta Theta, it was a nail-biter until the very end, keeping spectators at the edge of their seats.

The team will be eligible to play in CAB’s Intramural Cup at the end of the year along with the winners of intramural soccer, volleyball and dodgeball, racking up points if their team stays together, spirited and active.