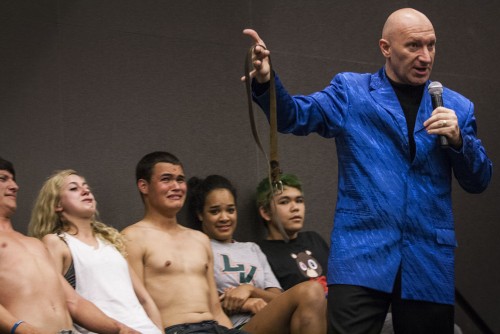 Hypnotist Mark Maverick found his way to the University of La Verne for one of the events sponsored by the Campus Activities Board. Freshman Paul Clark, freshman Ashlyn Cross, freshman Andrew Perotti, freshman Destinee Sales and sophomore Eldric Rabago were among the 14 students that were hypnotized. At one point during the event, the hypnotized students were told to imagine an animal that scared them and told that the belt was the animal that they were imagining. / photo by Ryan Gann

Close your eyes lean back and relax, pretend you are in an elevator descending floors from 10, and as you descend you will go deeper and deeper into hypnosis.

This is how Mark Maverick put 15 volunteers into a hypnotic state Monday night at the Campus Activity Board’s hypnotist performance in the Campus Center.

“I thought it was a great way to start off October,” comedy chair Cindy Vallejo said. “I love hypnotists so I wanted him to come and have a great performance.”

Vallejo had heard good feedback from other universities when deciding on a performer.

“Some of you will laugh so hard your stomachs will hurt,” Maverick said.

Originally from London, England, Maverick went to hypnosis school for about a year before coming to perform in the United Sates 15 years ago.

He has preformed at about 300 colleges and universities over the past 10 years.

Maverick explained how hypnosis works before he asked for volunteers.

“Hypnosis is the place a person goes right before they fall asleep. It takes about ten minutes for me to put them in a trance,” Maverick said.

He explained how he could not make you do anything that goes against your morals or values.

“So I will ask for volunteers who have no morals or values,” Maverick said.

Jessica Alberts, junior English major, was one of the volunteers who could not get hypnotized.

“I felt very relaxed, every nerve in my body shut down and it was dark and relaxing,” said Alberts.

Alberts woke up after someone laughed and had to go back and sit in the audience.

First, all of them put on a funny musical air performance when hypnotized into thinking they where performing for the president and first lady.

At one point in the show the male students entertained the audience with their stripper auditions and lap dances while convinced they where auditioning for the Chippendales.

Aside from thinking they were strippers some students like freshman Eldric Rabago was convinced he was a police officer. Rabago jumped on an imaginary motorcycle and tackled one of his friends with the intention to arrest him. Once Rabago had his friend against the floor Rabago mimicked using a taser on his friend.

Paul Clark, freshman double majoring in chemistry and biology, was one of the volunteers who was hypnotized throughout the whole performance.

“I thought I was asleep,” Clark said. “I remember we were in an elevator and then I had no shirt on and my butt crack was showing.”

Andrew Perotti, a freshman who also was hypnotized, wanted to see if it was real.

“I want to know what happened,” Perotti said.

Perotti did not remember anything that happened while in the hypnotic state and wanted to find out if anybody who attended had recorded video.

“I remember waking up without a shirt on,” Perotti said.

When maverick was asked about side affects, he said that there has never been a court case.

Students Miranda O’Neal and Jessica Aceves were convinced that hypnotism works but were skeptic that all the volunteers were hypnotized.

“I didn’t believe at all but after all this, I am more open to it,” Aceves said.