By Pablo Cabrera, Sarah Veissalov on October 26, 2012 in News 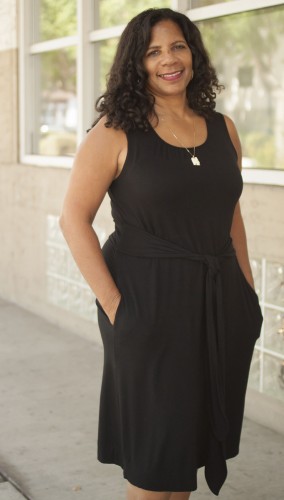 When some students think of a law class, they think of incomprehensible vocabulary, complex court cases and boring class discussions.

In professor Valerie Cummings’ class, however, there are no dull moments.

She leads her class with a bit of a sense of humor and a constant smile on her face.

Originally from Los Angeles, Cummings’ education and career pushed her to move to the East Coast.

Returning this year to Southern California to teach at the University of La Verne, she has started a new chapter in her life as the new associate professor of broadcast journalism in the communications department.

Cummings, who said she grew up in a Latino neighborhood in Los Angeles, earned her bachelor’s degree in Spanish from the University of Southern California.

She later received a master’s degree in journalism and a law degree from Columbia University in New York, where she was accepted into the New York Bar.

Her goal while in college was to be in broadcast journalism, though she said she also wanted to be a lawyer because she believed in social justice.

While she said she thought law school was great and even spent two of her summers working at two firms on Wall Street and Washington, D.C, ended up following her heart to a career in journalism.

“(The law firms) left a bad taste in my mouth,” Cummings said. “There was no social justice.”

In law school, she was offered a job with the justice department of civil rights division. This was a position she wanted to take, but instead she chose a corporate position on Wall Street that paid more money.

“Never take a job or position based on money,” Cummings said. “Despite the money, the job wasn’t as interesting or worthwhile.”

She ended up hating that experience and decided to go into broadcast journalism. She said she wonders where she would be now if she had taken the other job.

She worked in television for 20 years as a news producer for CBS Network in New York and Channel One in Los Angeles.

She was also a reporter for the Miami Herald newspaper.

As a producer, she said she liked working on longer assignments, for which she could dig in and tell the story.

Several years ago, when Cummings was balancing being a CBS producer and an adjunct professor of journalism at USC, she became aware of a full-time opportunity at Howard University in Washington, D.C.

She felt working at the country’s capital was a great and unique opportunity for a journalist and professor.

After working at Howard University for four years, she said she was ready to return to Southern California, so she applied for the job at La Verne.

“I fell in love with La Verne,” Cummings said.“The wonderful atmosphere, the people … and the mission the university stands for.”

During the interview process, Cummings taught a trial class during the January interterm.

Students were asked to attend and listen to the lesson she had created along with taking a test at the end of the lesson to assess what they had learned.

This method was one of the ways she was evaluated and considered for the position.

Cummings was very excited when she was offered the job here.

“I had a good feeling, but I didn’t know the competition and didn’t take it for granted,” she said.

Cummings is currently teaching Introduction to Mass Media and Law and the Mass Media. She will teach broadcast journalism classes in spring 2013.

She does a competitive game show similar to “Jeopardy!” for her law class to prepare for exams.

To add some props and a bit of ambiance to the game show environment, Cummings even brings in a bedazzled bell.

“I try to keep the students engaged by making them active participants … involved in the learning that takes place in the classroom,” Cummings said.

She said that as a professor you cannot just stand and lecture, it has to be a give and take relationship.

She likes to bring in new ways for interactivity in the classroom and to change it up every semester.

She has a very commutative relationship with her students and constantly asks them questions to get them to think critically.

Cummings makes sure that her students are prepared.

“This profession is only good as the people in it,” Cummings said.

“I want to develop young journalists,” she said.

Aside from teaching, Cummings became interested in a report that came out a few years ago about the rate of AIDS in black communities in this country being higher than in some countries in Africa.

She is currently working on her first independent documentary on the topic.

This documentary looks at the high incidents of HIV and Aids among African American women. Cummings is working on finalizing her film and hopes it will air on television in the near future.

“I really like her presence,” said junior broadcast journalism major Nudia Hernandez. “She is elegant and has a lot of grace and she keeps you on your toes.”

“She makes us participate to where we understand the material easily,” Neff said.

Journalist Kristina Borjesson described her longtime friend and former employee as being brilliant, smart and a motivator.

“Valerie comes from a long line of brilliant people and a family of high achievers,” said Borjesson, who met Cummings when they were both at Columbia University studying journalism.

She said they connected because they had similar values and grew up in the same type of culture.They have always helped each other professionally.

Borjesson also said that Cummings helped her tremendously during her first years working at CBS.

Cummings said hopes teaching is the final stop on her career path.

“She won’t be the easiest teacher, but she’s the best,” Borjesson said.