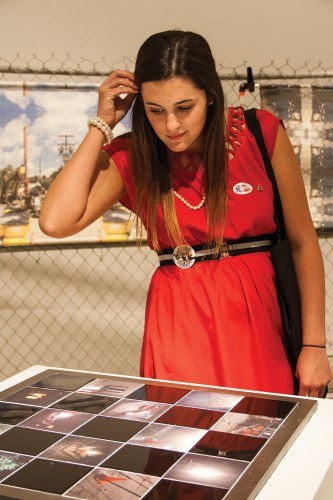 Site-specific installation art has brought the environment from outside the galleries inside. The current exhibit, titled “Site,” was curated by Associate Professor of Art History Jon Leaver and brought the work of Chad Attie and Bettina Hubby to the Harris Art Gallery. Theresa Porter, senior speech communications major, found interest in Bettina Hubby’s “Cone Tribute in Black” since it is a different process than a picture or painting. Hubby got her inspiration from a construction site right outside of her studio in Los Angeles, and created this piece by using ceramic tiles and picture decals. / photo by Jessica Harsen

Tension between the elegant and raw scattered on the clear white walls of the Harris Gallery in its latest instillation “Site,” featuring the collaboration between artist Chad Attie and Bettina Hubby.

“One thing I try to do is to bring different elements, different ways of working, artists who have different disciplines who have backgrounds and ideas to this space,” Director of University Art Galleries Dion Johnson said.

The gallery came to be after guest curator Associate Professor of Art History Jon Leaver approached Attie to be in a show. After discussions, Attie wished to collaborate with Hubby.

Hubby’s inspiration for this project began as construction started on Rowena Avenue outside of her home; she began visiting the construction site and taking photos.

“It’s something you usually kind of ignore and now I started to make it a subject matter for my art as sort of embracing it and find out how to see it,” said Hubby. “Now I’m looking for it everywhere, it’s a way to shift your perception.”

One of her works, “Rowena re-construction I,” features construction site photos edited to mimic a Rorschach blot, printed on silk while framed on a gnarly fence with neon tape and clamps.

While Hubby focused on the public scenery, Attie’s portion of the gallery carried a personal and private view of child like memories, featuring torn paper, toys, and other media placed together with statically, reflecting his imagination.

“I loved the chaotic but organized mess of it all,” international studies major Paula Zepeda said. “It shows how much the artist put into planning out how they wanted to do it, or how much they didn’t plan and it just turned out perfectly.”

The east wall of the gallery became a canvas for a few of Attie’s pieces as they were not displayed in a linear manner as works from past exhibitions are, but in a cut and paste fashion matching the Attie’s artwork.

“Jasper’s Last Ride” is a sculpture set up as a train set placed together incoherently with pieces not fitting together well, and a scatter of different children’s toys. It carries as extension of Attie’s work from the walls but with more as a topographic map.

“It was really interesting but its just a really fascinating kind of strange, strange chaotic artwork,” said psychology and speech communication major Maxfield Brown. “Its obviously placed together for a purpose, that purpose is probably one that I have to sit here for an hour and half to understand.”

Four of Hubby’s pieces were printed photos of fire hydrants on square tile pieces grouted together. Hubby said she wanted to explore the digital realm of conversation with images and her love of domesticating and using odd ways of printing photos while exploring the humor behind fire hydrants.

“She’s blurring the lines of making an object that’s an arts and crafts object versus making object that has aspirations for a high art piece,” said Johnson.

Hubby’s work does give a personal narrative of her neighborhood and shows her interpretation of it.

“It’s nice to bring amusement to people that are usually, you know not engaged with in that way,” said Hubby.

Gallery hours are Monday through Thursday 11 a.m. to 4 p.m.