By Mariela Patron, Pablo Cabrera on November 16, 2012 in News 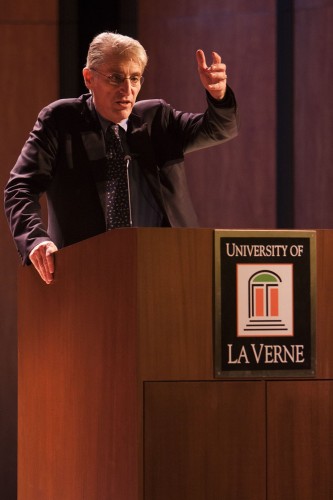 Jeffrey S. Gurock was the second guest lecture in the Kristallnacht Lecture series in Morgan Auditorium. Gurock presented “While the Holocaust Raged: New York Jews on the American Home Front, 1938-1945” on Nov. 8. Gurock spoke of his personal experiences growing up Jewish in New York and how his father, a Jewish firefighter, influenced him as a little boy. / photo by Pablo Cabrera

Jeffrey S. Gurock, professor of Jewish history at Yeshiva University, spoke about the ways Jewish Americans in New York reacted to the Holocaust.

The lecture, “While the Holocaust Raged: NY Jews on the American Home Front, 1938-1945“ was held at Morgan Auditorium on Nov. 8.

The lecture was to commemorate Kristallnacht, or the Night of the Broken Glass, during which synagogues were destroyed and more than 90 Jews killed, between Nov. 9 and 10, 1938 in Germany.

“As a Jew, a way we commemorate is with discussion,” Gurock said.

He was surprised that as a historian it never occurred to him to ask his parents about what actions they took in response to the Holocaust.

By this time, Gurock’s parents had already died.

“I became obsessed with ‘what do I know about my family history?’” Gurock said.

Gurock discussed the different ways Jews in the United States coped with what was occurring in Europe.

“There were some extraordinary measures,” Gurock said.

Gurock told a story about a group of rabbis who drove around Brooklyn on the sabbath and would yell “save the Jews.”

They recognized the graveness of the situation in Europe, university chaplain Zandra Wagoner said.

It showed that it was all right to break tradition during times of crisis, when people had to be saved, Wagoner said.

“In many places there’s a lack of recognition, in places that should have known better,” Gurock said.

The Jews in New York had difficulty understanding what was going on when they would read about the Holocaust in the newspaper, he said adding that this pattern was seen throughout the United States.

When 500 to 1,000 rabbis marched to Washington in protest, the president of the National Council of Young Israel objected to the march saying that it was not dignified and that Washington, D.C. was too busy for this.

At Yeshiva University, a Jewish institution, the school newspaper published an article as a joke with the headline “Adolf Hitler was once a teacher here.”

“It showed that the students didn’t have enough understanding of the gravity of the situation,” Wagoner said.

Gurock said that during the Holocaust Jewish communities tried to adopt a sense of normalcy in their lives. He said that the archives of the synagogue he attended as a child had no announcements of rallies or protests against the Holocaust.

The lecture came to full circle when Gurock said he found a note written by his mom regarding a hotel menu that said, “Would you believe us Americans were eating like this during war time?”

Gurock had finally learned how his parents felt about the war.

“Jews need to ritualize to keep the memory of the Holocaust alive and make it become a fixture of their identity,” Gurock said.