By Katherine Careaga, Sarah Veissalov on November 16, 2012 in News 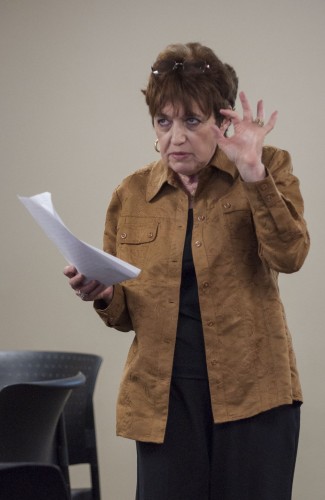 Andrea Labinger, professor of Spanish emerita, presents her research by reading “The Weight of Temptation” as part of the faculty lecture series Monday in the President’s Dining Room. “The Weight of Temptation” is the title of a book by the Argentinian author Ana Maria Shua that Labinger translated from Spanish. The faculty lecture series is sponsored by ULV Academy. Labinger is one of the seven founding ULV Academy members. / photo by Katherine Careaga

Andrea Labinger, professor of Spanish emerita, educated faculty and students on the multiple meanings of translation with her lecture “A Sense of Entitlement: Perils and Pleasures of Title Translation,” on Monday.

Labinger had originally proposed the title of her presentation as “The Weight of Temptation” from a title of a novel hoping to bring in a larger audience, but decided to change it.

Labinger joins with an author who has written a book in Spanish and translates the original work to English.

“It is best to translate into your dominant language,” Labinger said.

She said it is difficult to find good books that are written in Spanish.

Labinger went on to explain some common techniques that she uses when translating, which included literal translation, radical departure, vanillization, resolution of ambiguity and preservation of ambiguity.

She said there could be many translation techniques.

Labinger gave examples of each technique by comparing the titles of an original book to one that had already been translated.

She explained vanillization as the translation being flattened.

She showed an example of this technique by a book in Spanish titled, “La Isla de Los Amores Infinitos,” which translated in English to “The Island of Eternal Love.”

“You take what made it special and made it plain,” Labinger said.

Labinger continued her lecture by talking about ambiguity and tying it in with the last two techniques.

“Ambiguity is the meaning of the different stories,” Labinger said.

She used the example of the word “fin” and explained how it can be translated to mean, “end” as either a conclusion or as a purpose.

She is currently in search for a publisher for the translated novel.

Labinger said the novel will probably be titled “Murder of a Different Stripe.”

She uses pictures and listens to music in her translation process.

Labinger ended her presentation by reading a small passage from “Weight of Temptation,” which focused on how one is faced with temptation and how they can overcome it.

She added to the presentation by giving her input of translating as a career.

“It’s hard to make a living translating,” Labinger said. “You have to love what you’re doing and have to have another source of income to survive.”

“I loved the different titles,” Madhuri said. “Don’t think how much goes into it.”

Madhuri brought up the example of the translation of the novel, “The Girl with the Dragon Tattoo” during the lecture and said that the themes are different in the Spanish version.

“You need to know cultures really well to bring an understanding,” Madhuri said.

Junior biology major Nathanael Morales came in with a mindset based on his interpretation of the lecture title.

Morales thought the presentation was really interesting and liked her techniques for coming up with the titles.

“It is not something you think about often,” Morales said. “You have to also have to consider the marketing value of the product.”