By Hunter Cole, Sarah Veissalov on November 9, 2012 in News 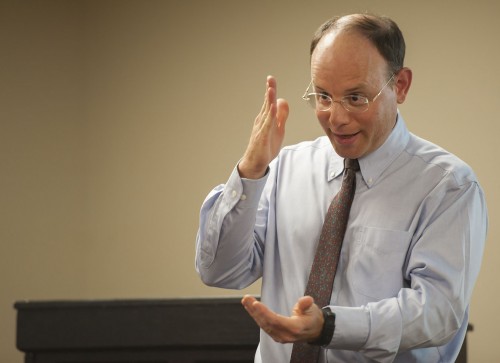 Professor of History Kenneth Marcus, a musician and author of two books, speaks at the faculty lecture series in the President’s Dining Room Monday about his documentary on current historical pageants in the United States. Marcus’ lecture included the discussion of the historical Ramona Pageant, a story modeled after the killing of the Cahuilla Indian Juan Diego. The outdoor play has been performed in Hemet since 1923, making it America’s longest running drama. / photo by Hunter Cole

Kenneth Marcus, professor of history, presented “Docu­mentary Pageantry: An Analysis of Three Historical Dramas in Modern America” on Monday as part of the faculty lecture series.

Faculty members and students who attended left the lecture with an insight of pageantry and how it related to Southern California history based on a research project Marcus has been currently working on.

“Pageantry is understanding and dramatizing history based on medieval model,” Marcus said.

“These pageants were chosen because they were the oldest, longest pageants in American history,” Marcus said.

All three pageants are based on problematic relationships.

Marcus said there needs to be a great deal of effort in order to keep these pageant productions alive.

He also said that pageants are constant and when one ends, production for the next one begins.

Marcus mentioned that his research for this project came from his book titled, “Musical Metropolis: Los Angeles and Creation of Music Culture.”

He also had the help from documentary filmmaker, Jon Wilkman and his research assistant, Anne Collier.

The pageant performance was created by the cities of Hemet and San Jacinto Chamber of Commerce, but it was based on the novel written by Helen Hunt Jackson.

“It (the performance) is a way of opening windows of the past,” Marcus said. “It is a way for the community to come together.”

He said the pageantry is a popular form of a historical drama in communities across the United States.

In 2008, the “Ramona Pageant” continuation was threatened due to funding; the Soboba Indian tribe donated $100,000 to save the play.

Though there was a struggle to continue funding the play and attendance declined, it still has an unbroken record of performance since the year 1923 to today.

In order to fund this research project, they applied for several grants and though they were denied some, they have been successful with other grants.

Marcus mentioned there are tensions with community for who gets chosen for the roles of the play and who does not.

Marcus ended his presentation by showing a short clip of his research project to show where they were and to give the audience a better understanding of what the play consisted of and the historical background.

The clip described the “Ramona Pageant” as an emergence of the 20th century in Southern California.

It also included interviews about the pageant, the community and a scene from the actual performance.

“Seeing the documentary itself was very powerful,” professor of music history Kathleen Lamkin said. “He brought together a scholarly perspective of research.”

Junior business administration major Rebecca Ayala said she was confused about the topic of pageantry and thought the presentation was going to be about how beauty pageants affected the culture.

“Taught me more about California history and how over time it can get lost,” Ayala said.

Lamkin thought it was profound to know that we have something like pageantry and is interested in seeing the play live.

She also said this research project helps us in vision the future and see the changes in history.

Lamkin hopes for success in the final touches of the research project Marcus is involved in.