By Candice Nuñez, Nicole Ambrose on February 15, 2013 in News 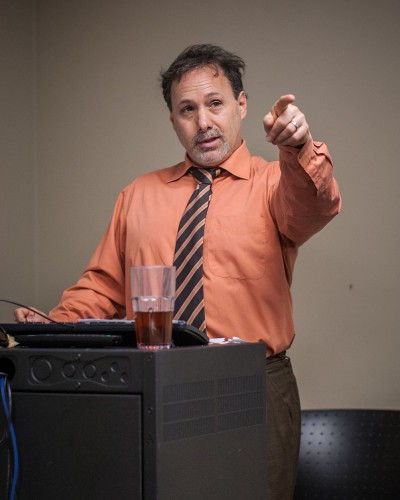 Jeffrey Kahan, professor of English, presents his lecture “Forging a Ghost: The Hunt for Bruno” Feb. 11 in the President’s Dining Room. Kahan discussed William Henry Ireland’s forged works, focusing on “Bruno,” the title of one book that was never found. He explained how academic settings should have no tolerance for forgery and how it may have shaped views on Ireland. / photo by Nicole Ambrose

Professor of English Jeffrey Kahan talked about the life and mysteries of William Henry Ireland during his lecture titled “Forging a Ghost: The Hunt for Bruno,” Monday in the President’s Dining Room.

Kahan began with a description of Ireland’s early life and upbringing in London in the late 1700s, where Ireland was known for apparently forging Shakespearean documents and plays.

“How would we feel if the scholarly writings we quote regularly were all fake?” Kahan said. “Are academic fakes worse than literary fakes?”

“Bruno” was the title of one of the supposed forged books that Ireland had claimed to write, but was never found.

The topic of forgery was central to Kahan’s discussion of Ireland who led a life of forgery.

He referenced Anthony Grafton, a professor at Prince­ton University and one of the foremost historians of early modern Europe, about the effects of forgery in an academic setting.

Grafton believes that it is critical that academics not tolerate forgery.

He said everyone knew Ireland was the forger because he had confessed to it, even though they had never found some works, including “Bruno.”

“(Ireland) had hoped that he would be considered a genius and (a) guy who fooled the world,” Kahan said.

He said perhaps Ireland did not do it for financial benefits, but maybe to find a literary identity of his own.

“Forgery is all about identity,” Kahan said.

“Aren’t we all forgers? Isn’t this identity in the room you’re sitting in different from the identity of yourself playing in the backyard with your dog?”

Kahan said he believed that Ireland figured if he had no identity, why not just play cat and mouse with the idea and adopt the persona of the man who forged the Shakespearian letters.

Kahan said there are many reasons why Ireland supposedly forged the letters.

“I was very fascinated as to what Ireland’s intentions were when he claimed to be the forger,” said freshman business major Cody Luk, who attended the Monday talk.

“It’s interesting that the topic of forgery was just as important then as it is now except now it’s way easier to do what he did back then this day in age,” junior business administration major Rebecca Ayala said.