By Elsie Ramos, Stephanie Ball on February 22, 2013 in Basketball, Sports 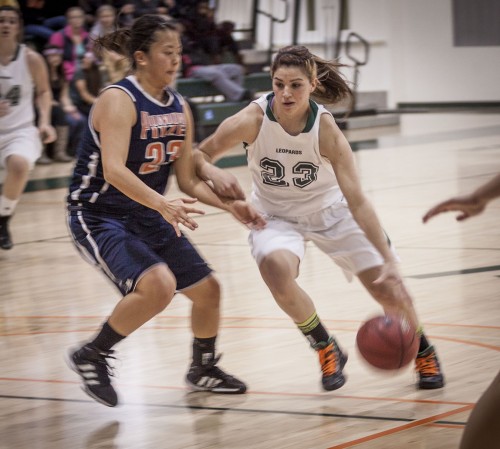 During the first half, Pomona-Pitzer freshman Juliah Shay Kim tries to steal the ball from La Verne senior Amanda Copas. Copas is a three-year letter winner who earned Second Team All-SCIAC honors in 2011-12. The Leopards beat the Sagehens, 111-69, Monday, but failed to make the SCIAC Tournament. / photo by Stephanie Ball

Emotions and the score ran high for the Leopard seniors Monday, as the women’s basketball team beat Pomona-Pitzer on senior night, 111-69.

Copas finished her career ranked ninth all-time in scoring, fourth in assists, third in steals and tied for fourth all-time in appearances with more than 100.

“I was happy, sad, excited all at the same time,” Copas said. “It was a big mix of emotions, but it was mostly happy. Reaching 1000 points was definitely a big accomplishment. It was a big motivating factor going into the season and it’s something I really take pride in.”

“Senior night is always an emotional night, but I was excited to share it with this group of girls,” Cribbs said.

It was a bittersweet win for Copas, not only because it was her final game in a Leopard uniform, because her dad, Dominick Copas, is an assistant coach for Pomona. Dominick is also a former La Verne baseball player and was inducted into the Leo Hall of Fame in 2009.

“It was nice that I got to play my last senior game here against him,” Copas said. “I have always tried to have my own great player moments and use his success as motivation.”

La Verne started off the night with a three pointer by Webb, and they never let Pomona get any closer.

The Leopards made 19 three pointers and shot 42 percent from the field. Shooting 3-pointers was not only the theme Monday, but the theme for the season.

La Verne finishes the season with the third highest scoring offense in Division III with 85.5 points per game. They also finished third in the nation in 3-point field goal attempts per game with 11.3.

“We’re third in the nation in shooting threes, so that’s our game,” Rogers said. “That’s how we play.”

“The 3-point shooting is definitely planned,” Cribbs said. “We wanted to be first in the nation with 3-pointers made.”

By the end of the first half La Verne led 61-34 and never took their foot off the pedal. The Leopards held Pomona to 65 shot attempts and forced 37 turnovers.

“We want to push,” Rogers said. “We don’t practice anything else. We want everyone to play and be productive. It was a great game tonight, everyone gets to score and be a part of our win.”

Guard Megan Musashi and Kinney led the Leopards with 13 points. Kinney was a perfect three for the three from 3-point range.

With the win La Verne found itself in a tie with Occidental for the final spot in the SCIAC Tournament, which began Thursday. The tie was broken with a coin flip that did not fall in La Verne’s favor.