By Julian Mininsohn, Zachary Horton on February 22, 2013 in Basketball, Sports 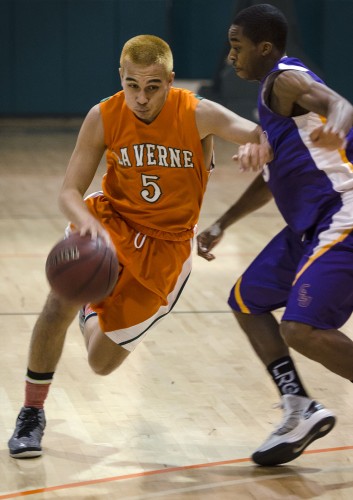 La Verne sophomore guard Jourdan Simmonds drives past Cal Lutheran freshman guard Dan Wade on Saturday. After trailing by as many as 18 points, the Leopards clawed their way back to beat the Kingsmen, 85-81. Simmonds played valiantly on senior night; of his 17 points, he scored the team’s last nine, including a game-tying three, and another three that delivered the lead and the win for the Leopards. / photo by Zachary Horton

In an unforgettable senior night game, the men’s basketball team rallied from 18 points down to defeat Cal Lutheran, 85-81, Saturday at Frantz Athletic Court.

Down by as many as 13 in the second half, the Leopards did not lead until the final minute of the game, but they managed to outscore Cal Lutheran 27-10 in the final seven minutes to capture the victory.

“We have been in situations like this before,” senior center Alex Wolpe said. “When we are down and things are not going our way, we just stay positive.”

Cal Lutheran came out firing, taking a 28-10 lead 10 minutes into the first half.

The Leopards would respond with a 19-4 run cutting the Kingsmen lead to three points, 32-29. Cal Lutheran would keep the lead heading into halftime, 43-36.

La Verne head basketball coach Richard Reed was confident that his team would get back into the game.

“Basketball is a game of runs, and we were going to have our run,” Reed said.

The Kingsmen had a double-digit lead for most of the second half.

“It was just about staying focused,” senior guard Jake Vieth said. “One rebound at a time. One stop at a time.”

Cal Lutheran was up 79-76 when La Verne sophomore guard Jourdan Simmonds buried a 3-pointer to tie the game at 79 with 1:26 left.

Simmonds wasn’t finished. After the Leopards forced a Cal Lutheran turnover, Simmonds nailed another 3-pointer to give his team their first lead of the game, 82-79, with 32 seconds remaining.

After a Cal Lutheran basket, Simmonds was fouled and sank both free throws. With 16 seconds left in the game the Leopards had an 84-81 lead.

Simmonds scored the Leopards final nine points to finish with 17 for the game.

The Kingsmen were led by freshman guard Dan Wade and junior guard Michael Palmer with 18 points each.

Seniors Vieth, Bauer and Wolpe were honored before the game as part of senior night.

“It is something I am always going to remember,” Wolpe said.

“I love my team,” Reed said. “I am the luckiest coach in the world.”

La Verne won five out of its last six games, but it was not enough to get them into the SCIAC Tournament.

The Leopards ended their season with a win at Caltech Tuesday, 65-49. With the win, the Leopards finished fourth in SCIAC with a 9-7 record and 11-4 overall.