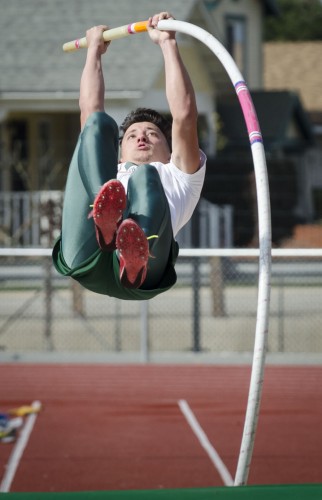 It has been more than six years since a track and field event has taken place on the La Verne campus. On Saturday, La Verne’s track and field team placed first in 14 events overall, hosting its first home meet since 2006 on the revamped Ortmayer Stadium.

The Leopards had a successful season debut in their new stadium, as an excited home crowd cheered them on against Biola and Cal State San Marcos.

The men took first in both relay events with the help of junior All-American Chancise Watkins finishing with a time of 44.9 seconds in the 4×100 meter relay and 3:38 in the 4×400 meter relay.

“We all have been working really hard,” Watkins said. “We’ve been waiting for this day to come. I think this is the hardest I’ve worked out of the two years I’ve been here.”

Watkins also got first place in the men’s 600-meter race while setting a personal record of 1:24.

Freshman Robert Oshodin won the 200-meter dash with a time of 23.05 in his running debut.

Junior Nicole Crutchfield placed second in the 60-meter dash with an 8.13 and contributed to the women’s 4×100 relay victory.

“It’s the beginning of the season so it’s not the greatest, but it is a start and we are working to where we want to be,” Crutchfield said.

In the field events, senior Losa Akauola took first in shot put and discus for the women with a winning throw length of 42 feet, 5 inches in shot put and 126-7 in discus.

The men won a total of four field events. Senior Alfonso Moreno took first in shot put with a 41-10, and fellow senior Ryan Gann came in first for discus with a toss of 131-1. Junior James Francis placed first in men’s high jump after clearing 5-10, while sophomore Jabre Millon won the triple jump with a leaping length of 42-8.

After hosting track events at other schools for the past six years, La Verne felt a sense of pride competing on their own field. According to head coach Pat Widolff, the new facility will contribute to an overall better season for the track team.

“The new field helps us train better, the kids don’t get hurt, the track is brand new and soft so it helps us have a better season,” Widolff said.

The renovation of Ortmayer Stadium started in early 2012. When the refurbished stadium opened in September, the field included new artificial turf, lights, track and scoreboard for around $4 million, according to Athletic Director Julie Kline.

“I think the picture is bigger than just a new stadium,” Kline said. “It’s a point of pride and engagement for all of our students and school community.”

La Verne’s track and field team hopes to build off their opening success as they prepare to take on Pomona-Pitzer at the All-Comers Meet on Feb. 16.