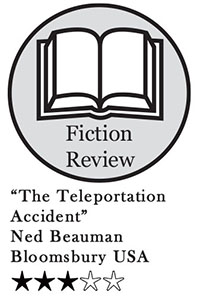 With a title like “The Teleportation Accident” you expect to hear about the sci-fi adventures of a nerdy, awkward pre-teen. Instead, Ned Beauman’s novel takes readers back to a vague historical reference to the 1930s to follow the misadventures of Egon Loeser in his passionate attempt to get laid during Hitler’s rise to power. Making a reference to people who like to “paint the devil on the wall” and look for trouble, this story is the perfect example of someone who is just dumb enough to dive head-first into the trouble.

The story is entertaining and definitely a good read if readers are looking for a book to fill time. Each chapter separates itself by years passing in the story so no information is lost between chapters. Thankfully, it is not difficult to follow since the main character ignores the history happening around him.

Set against the events leading up to World War II, the reader is dropped into Berlin to witness the failing career of Loeser as he works with two friends to try and share the story of Adriano Lavicini, a designer who came up with the first complicated system of pulleys that moved sets around with ease in the late 17th century. Unlike Lavicini’s design, Loeser’s rigs are simpler. Dubbed “the Teleportation Machine” after Lavicini’s original design that destroyed the theater in which it was installed, it is no surprise to Loeser that it fails.

Thus the story is launched and we find Loeser accepting his defeat and drowning his failure at a party. Surrounded by fake friends and his recent ex-girlfriend, Loeser resigns himself to putting up with other guests. Here Adele Hitler, an old student of Loeser’s who has matured into a beautiful young woman, is introduced. His break-up, mixed with misplaced confidence launches the reader into the adventure that is Loeser’s attempt at rediscovering a sex life.

Though it takes about a chapter and a half to finally get into the flow of the story, the temptation to put down the book is only a flicker. After the opening to set the backdrop of the novel, the story picks up with strange happenings and witty conversation that our main character completely misses because he is so focused on getting tail.

The descriptions of the part of Berlin where the story takes place is appropriate for someone that goes from work to a bar or whorehouse and leaves a lot to the imagination of street layout. Since the story is set right before Berlin was affected by the war, we see a blurry glance of history through the eyes of someone who does not care for politics or news.

It is not until later in the story when Loeser leaves Europe for Los Angeles that it actually becomes more descriptive. Trapped in the world of the Americans, he must make heads and tails of why Sunset Boulevard is so long and why men would voluntarily wear pastel suits and attend dinner parties. The benefit this has is readers get a stranger’s description of a well-known city. Everything is short and to the point with no extra back-story connected to Loeser’s “once upon a time” sex life.

During this time period, Los Angeles is not allowed to build over a certain height and it is the place where movie stars live. In reality, it is described as a bunch of bored rich people who want to throw their money at a cause and this time it happens to be the Jewish people misplaced by the Nazi’s takeover.

Supposedly set between the ‘30s and ‘40s, this story completely throws out any appropriate slang or wording that is usually expected from books that reference years passing so frequently. Cursing, sexual innuendos and sarcasm just seem to drip between the characters that make the conversations easy to imagine in today’s world. However, that does not mean it made the story less enjoyable. The dialogue makes the conversations easier to understand without making constant references to historical happenings. The most historical thing that happens is Loeser accidently participates in a book burning while he is still in Berlin.

The characters take at least a chapter for anyone to form an attachment. Loeser for example is full of self-doubt and constantly brings even the deepest of his thoughts back to having sex. His treatment of other characters is reminiscent of Holden Caulfield’s “everyone is a phony” belief just with less confidence. Loeser also does not care for anything happening around him and Beauman is quick to remind us of that. In one chapter, Loeser receives a detailed letter from an old friend that goes into detail about his confrontation with a Nazi soldier and he quickly crumples it up complaining that he has better things to do. If you did not study the history of World War II you will be very lost with the references that pass by Loeser.

Personally, I would have been happier just reading all of the minor character’s back stories till the book finished. Beauman did an excellent job coming up with the weirdest back stories he could muster for characters that Loeser comes in contact with. An impotent con man, an entrepreneur with a neurological disorder that has him eating pictures of pickles and an American scientist who grew up on the run from the Catholic Church.

Loeser, ever desperate to find Adele, takes every personality in stride and ignores each and every quark that would send any normal people to the police.

It is not until the book is past the halfway point that the real tense part of the story begins to unfold. Through a series of accidents, Loeser gets caught up with communist supporters who believe he knows more that he actually does. The plot unfolds to the perfect example of “wrong place at the wrong time” scenario as people begin to bribe and threaten Loeser for information he is absolutely clueless about. You almost forget that this story is actually classified as science fiction. Loeser is a nice distraction from the science that is being experimented with even though as a reader you never expect to fully learn anything about it because it is from Loeser’s point-of-view.

If readers can stick with the story and make it through the first few chapters of whining, the book makes for a hilarious misadventure.

“The Teleportation Acci­dent” is available as hardcover on Amazon for $15.99, and $12.99 for the Kindle edition. It is also available at Barnes & Noble for the same prices.

The University’s Wilson Library honored Banned Books Week this week with a display where students could pick up great works that have been banned by some schools and libraries across the country.
News

Professor of Philosophy and Religion Richard Rose reads from his recently published book “An Interreligious Approach to a Social Ethic for Christian Audiences,” published by Christian World Imprints.
LV Life

A little boy cries in restlessness as he waits in the doctor’s office with his mother. He is unsure what will happen once his name is called, and is scared. To calm her son, the mother pulls out her recent children’s book purchase called, “Doctor, Doctor, What Do You Do?” to read with her son.
Community News