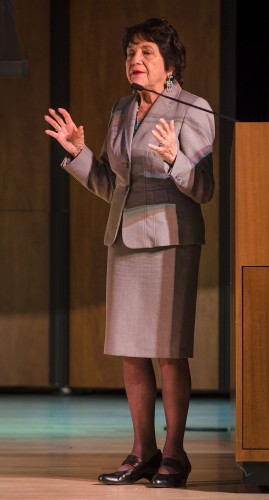 Dolores Huerta, co-founder of United Farm Workers union, speaks in Morgan Auditorium Friday. Diversity Week’s community presentation on International Women’s Day showed that it was over 50 years ago that she co-founded the union with Cesar Chavez. / photo by Zachary Horton

In a campus-wide presentation ending diversity week, the multicultural council and student services had Dolores Huerta speak for the culminating event on International Women’s Day.

Morgan Auditorium was almost filled to capacity Friday afternoon as students, faculty, staff and fans of Huerta filled the hall.

Huerta is known for being a civil and labor rights activist who worked alongside César Chávez in the ‘60s.

Huerta is currently the president of the Dolores Huerta Foundation and the co-founder of the United Farm Workers at the age of 82.

President Devorah Lieberman was the first to take the stage and gave Huerta praise and thanks for all her hard work throughout the years.

“If it wasn’t for Dolores Huerta we wouldn’t be politically, socially and intellectually involved with the things that are happening now,” Lieberman said.

“Dolores, you are a role model for everyone in this room so for that, I thank you.”

Gradilla described Huerta’s long career in activism and how she is seen as one of the most inspirational role models to Hispanics and women everywhere.

Gradilla also described several of Huerta’s prestigious awards and honors given to her throughout the years, including being presented with the Medal of Freedom by President Barack Obama in 2012.

Before Huerta took the stage, poet and fellow activist Gustavo Ramirez read an inspiring passage by Langston Hughes, which was then followed by a poem of his own.

After a brief standing ovation from the audience, Huerta finally spoke.

Huerta talked about various topics currently happening right now in the United States from education, voting, immigration, racism and the power of women.

The main concept of Huerta’s presentation revolved around the power being in the people.

She said in order for change to happen, we have to do it on our own.

“The power is in your person, you have all the power you need,” Huerta said. “Nobody’s going to do this for you; you have to do it for yourself.”

Huerta gave an example on her exact concept put into action.

Her organization had successfully contacted 1,500 people to vote yes on Prop. 30, which later passed.

“This is a perfect example of the power of the people,” Huerta said.

Many of the students in attendance were very moved by Huerta’s words and encouragement to be the change.

“Dolores’ presentation was life changing for me, it was like a class and I felt like I learned so much,” senior speech communications major Ibis Cordero said. “I have different insights on new topics now.”

Huerta closed her presentation by encouraging the audience to rise to their feet and chant the famous words “Si Se Puede!” and “Vive!” with her.

“My favorite part of Dolores’ speech was when she got the whole auditorium to shout ‘¡Vive!’ I felt so inspired,” Sanchez-Miranda said.

“I’ve had the honor to hear Dolores speak once before at a march in Los Angeles a couple of years ago,” senior child development Ana Hernandez-Luna said. “I was so pumped up when we all began to chant at the end, she’s such an inspirational speaker.”