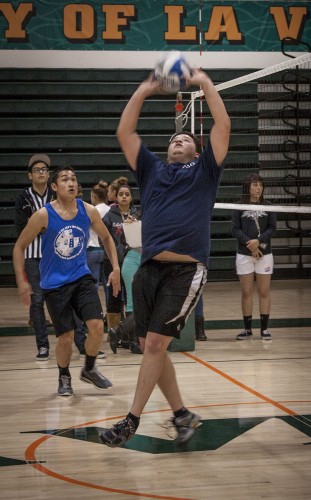 Senior business major Spencer Contreras and junior criminology major Ziggy Azarcon team up to lead their Phi Delta Theta team to a victory on the second night of the four day volleyball tournament, Feb. 27. Phi Delta Theta went on to the finals and eventually lost to the Monstarz. / photo by Stephanie Ball

The two winning teams of the semi-finals played the best two out of three games to determine the tournament winners.

Dowell began recruiting team members since the beginning of the school year and said he enjoys putting teams together for the intramural sports competitions.

“It’s because I want to win,” Dowell said. “Because if you’re not first, you’re last.”

In the semi-finals, the Monstarz played against Iota Delta while Phi Delta Theta faced Team Anchorman and Anchorwoman.

It was a constant struggle for the teams to stay on top keeping spectators on the edge of their seats until the very end.

In the first game of the finals, Phi Delta Theta beat the Monstarz, 15-10.

The Monstarz then made a strong comeback, winning the second game, 15-6.

The third game ended with a close margin, 16-14, but ultimately the Monstarz emerged as champions.

This tournament was freshman sociology major and Monstarz co-team captain Jennifer Wheeler’s first tournaments and says it will not be her last.

“It was really fun,” Wheeler said. “I’ll definitely do this again next year.”

Wheeler said she played volleyball during high school, and she found it cool that she finally got the opportunity to play during college.

Despite its loss, Phi Delta Theta showed prominent team spirit throughout the tournament.

Chants such as, “Let’s go, Phi Delts, let’s go” echoed through the gym.

At one point during the third game of the finals, team members started chanting the names of each Monstarz player who served in order to distract them.

The loudest cheering in the gym belonged to freshman liberal studies and psychology major Reneé Cruz.

She attended all four days of the tournament, her enthusiasm growing and her voice reverberating as the games progressed.

CAB holds intramural tournaments in a variety of sports throughout the year and in the end, only one team holds the Intramural Cup.

Teams gain points for the cup by keeping their team together and participating in all intramural events throughout the year.

Both finalist teams have also competed in other intramural events this year keeping them on track to win the cup.